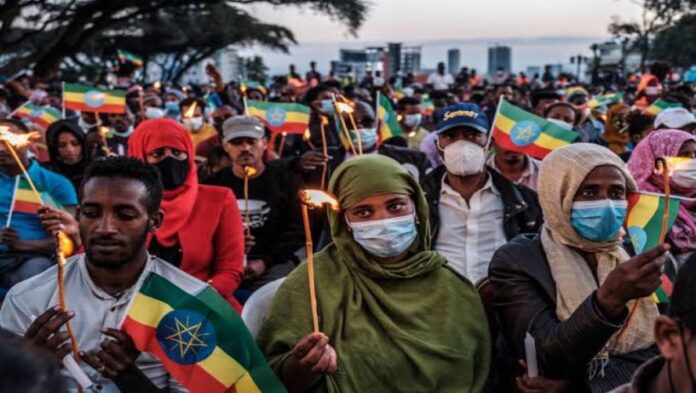 The African Union mediator said the parties involved in the conflict in the Tigray region of northern Ethiopia had agreed to a “definitive cessation of hostilities” more than a week after formal peace talks began in South Africa.

Former Nigerian President Olusegun Obasanjo also said Wednesday at the first briefing on the peace talks that the Ethiopian government and Tigray authorities are committed to “organised, smooth and coordinated disarmament” along with the “restoration of law and of order”, and “unrestricted access to humanitarian supplies”.

He told a news conference that the agreement marks a new “dawn” for Ethiopia.

The war that broke out in November 2020 pitted Tigray’s regional forces against the Ethiopian Federal Army and its allies, which also include forces from other regions and neighboring Eritrea.

Ethiopian Prime Minister Abiy Ahmed welcomed the agreement reached on Wednesday and said it would be implemented.

The commitment to peace remains unshakable. “Our commitment to working together to implement the agreement is equally strong,” he said in a statement.

The Tigray rebels praised the deal and said they had made concessions.

“We are ready to implement and accelerate this agreement,” said the head of its delegation, Getachew Reda.

“To deal with the pain of our people, we made concessions because we need to build trust.

“Ultimately, the fact that we’ve reached a point where we’ve now signed an agreement speaks volumes about the willingness on both sides to put the past behind them and embark on a new path to peace,” Reda said.

The conflict, which at times stretched from Tigray to the neighboring regions of Amhara and Afar, killed thousands, displaced millions from their homes and left hundreds of thousands on the brink of starvation.

UN Secretary-General António Guterres welcomed the ceasefire, according to a UN spokesman.

“This is a very welcome first step and we hope it will bring some comfort to the millions of Ethiopian civilians who have already suffered as a result of this conflict,” spokesperson Stephane Dujarric told reporters.

“The African Union’s announcement to sign an end to hostilities between the Ethiopian government and the Tigray People’s Liberation Front represents an important step towards peace,” State Department spokesman Ned Price told reporters.

Misenbet Asefa, an assistant professor of law at the University of Addis Ababa, described the deal as a “major political development”.

“There is a lot of emotion [in Addis Ababa],” Asefa told Al Jazeera.

The conflict had “socially, politically and economically devastating effects and I am pleased to see that both parties … have agreed to cease hostilities”.