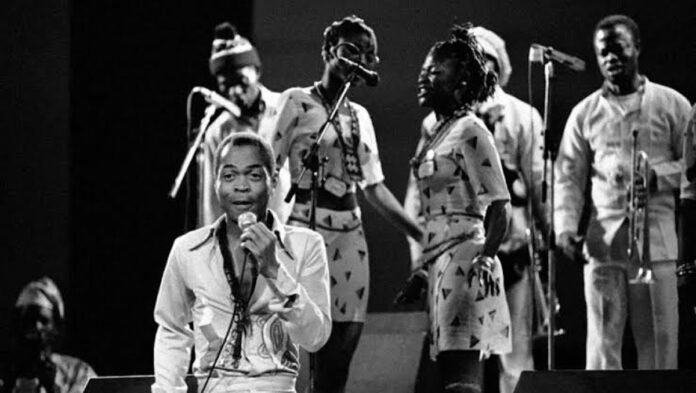 The Paris Philharmonic has paid tribute to Afrobeat legend, Fela Kuti by recreating the atmosphere of his sweaty and politically charged Nigerian nightclub, The Shrine, which became a beacon for global stars like Stevie Wonder and Paul McCartney in the 1970s.

The son of Afrobeat legend, Fela Kuti spoke about his father’s courage in using “music as a weapon” ahead of an impressive exhibition at the Paris Philharmonic on Thursday.

“Instead of taking up arms, music was the only tool he had. It was a weapon he could use against authority, colonization, and corrupt African governments,” said Femi Kuti, 60, himself a musician of huge success.

Kuti died in 1997 of complications from AIDS, but his pioneering work remains as strong as ever, and is often cited by today’s stars like Flea of the Red Hot Chili Peppers or Beyoncé and Jay-Z performing his hit track, “Zombie” on Homecoming Live.”

“I’m not surprised. Big people like Miles Davis have talked about Fela,” Femi Kuti said of his father’s enduring popularity. “Afrobeat was the staple of hip-hop, that’s what hip-hop gets its sauce from,” he added.

“When we started working on this exhibition project, the Black Lives Matter movement was emerging and Fela’s struggle in the 70s and 80s had effects there,” said Alexandre Girard-Muscagorry, one of the curators of the immersive exhibition.

For most of his life, Kuti was harassed by Nigeria’s military authorities for his relentless criticism of corruption and violent mismanagement.

There was a particularly vicious backlash after he refused to participate in an official music festival in 1977, hosting a side event that became far more popular, attracting international stars such as Stevie Wonder.

Soldiers responded to his meeting by burning down his house and pushing his mother out of a first-floor window, causing injuries that led to her death a year later, Femi Kuti said.

“He was a voice for the voiceless, the only opponent brave enough to stand up to the harsh military dictators of the day, and he paid a heavy price,” said Femi Kuti.