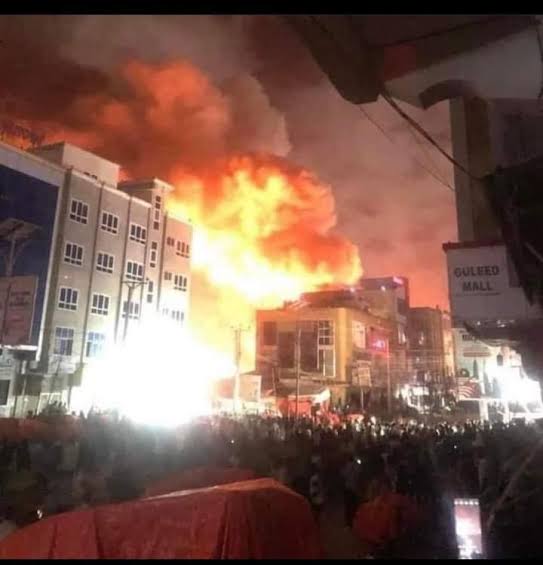 An enormous fire tore through the main market in the city of Hargeisa in northern Somalia overnight;  leaving about two dozen people injured and destroying a large number of businesses, officials said on Saturday.

Disheartening Images posted on social media showed flames; and huge billowing clouds of smoke in the night sky over Hargeisa, the capital of Somalia.

The cause of the fire that gutted the sprawling Waheen market which is known as the lifeblood of the city and home to an estimated 2,000 shops and stalls is not yet known.

Officials revealed that the fire started on Friday evening; but was largely brought under control by dawn on Saturday, although some small areas were still burning.

Hargeisa’s Mayor Abdikarim Ahmed Moge told Reporters at the scene; that “The town has never witnessed such a massive calamity,”

He further added that “This place was the economic center of Hargeisa and even though the firefighters did their best to contain the fire, the market is destroyed.”

Abdikarim Ahmed said the blaze could have been contained before causing such extensive damage but that the firefighters’ efforts were hindered by access problems.

The market is a crowded warren of shops and makeshift stalls, with no proper streets, only narrow pathways.

President of Somaliland Muse Bihi Abdi said during a visit to Waheen that about 28 people, nine of them women, were injured, but that no loss of life had been reported so far.

He revealed that the government would be releasing $1m to help with the emergency response to the disaster.

Hargeisa Chamber of Commerce chairman Jamal Aideed said; the loss of the market was immense as it accounted for 40 to 50 percent of the city’s economy.

A market trader with the name Bashi Ali; said “I have lost everything tonight; his fire was the biggest I have ever seen in my life,”

He added that “I had several businesses in the market, and all of them burned to ashes. All we can learn from this disaster is to plan the market well,”