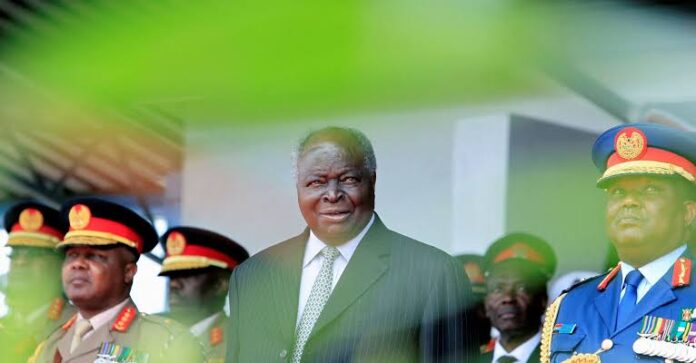 Mwai Kibaki, who served as Kenya’s third president from 2003 to 2013, has died at the age 90. The current Kenyan President Uhuru Kenyatta announced his death.

“Mwai Kibaki will forever be remembered as a gentleman in Kenyan politics; a brilliant debater and one who steered development in the country,” Kenyatta said.

Kibaki, who served as president between 2003 and 2013 is credited with reviving Kenya’s then ailing economy.

Kenyatta ordered a mourning period to honour Kibaki, during which flags will be flown at half-mast, according to international media.

State House Kenya released a statement yesterday, saying that a national funeral steering committee has been constituted; featuring representatives from the government and members of the third president’s family.

The committee will convene for its inaugural meeting, and it will in due course issue a detailed programme of the events leading up to the state funeral, said a statement.

“That programme of events shall include the dates and venues where the family shall receive visitors; and shall accord all Kenyans the opportunity to participate in paying of last respects to the former head of state and government.”

Furthermore, the family of the late Mwai Kibaki acknowledged the outpouring of sympathy; and the condolences messages received from all corners of the globe. Aljazeera reports that Kibaki’s legacy was marred when irregularities during a re-election bid ended in deadly violence.