After Being Expelled From Mali, French Forces Move Operations To Niger 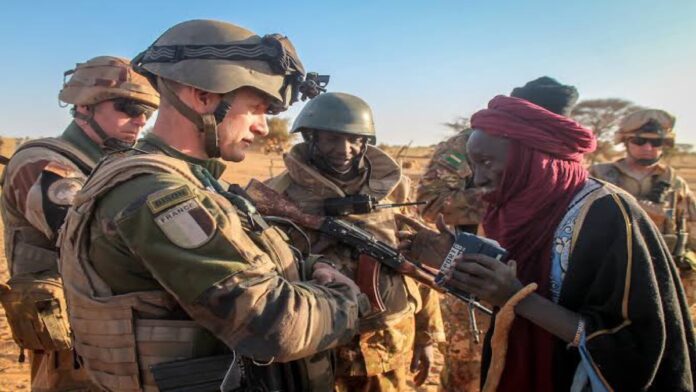 After nearly a decade of fighting militants in Mali, France is pulling its troops out of the country as its operatives will now move operations to Niger, a neighboring country.

According to reports, the French forces in the Sahel will change modes of operation after leaving Mali, acting “in support” of local forces rather than replacing them.

President Emmanuel Macron announced the withdrawal in February, saying Operation Barkhane would continue elsewhere in the Sahel, but in a smaller and reconfigured form.

In an interview with AFP and Radio France Internationale (RFI), Barkhane’s commander, General Laurent Michon, said the force now has fewer than 2,000 men in Mali.

The withdrawal will be “completed by the end of the summer as requested by the president,” he said.

“About 2,500 French soldiers” will remain in the Sahel after the operation is completed, “but this depends mainly on the wishes of African states,” Michon said.
“France and the Europeans are moving towards more cooperative operations,” he added.

These operations will be “more strictly determined by requests from African countries and will take the form of ‘support’ rather than ‘replacement’ of the local military,” Michon explained.

Michon illustrated the closer cooperation, saying that last year a French unit on the Mali-Niger border was placed under the command of a Nigeriens general in charge of the area.

However, in March, France set up a “partnership headquarters” in the Nigeriens capital, Niamey, “destined to work with African officers embedded in Barkhane,” he said.

As for the withdrawal, France has already abandoned its bases in Gossi and Menaka, in central Mali, and is currently breaking away from a camp in Gao, the general said.

Farewell equipment and forces will be moved to neighboring Niger for logistical reasons but will not remain there, the general added.

Recall that France had intervened in Mali in 2013 to contain a jihadist-backed insurgency in the north of the country.

At its peak, the mission had 5,100 troops deployed across the region and provided vital air force, troop transport, and reconnaissance support.

Fifty-eight French soldiers died at Barkhane and his predecessor, Serval. “In my opinion, the withdrawal (from Mali) is not a failure,” Michon said.

With Barkhane’s help, the Malian army has been increased from 7,000 to 40,000 men, “and we have the terrorist groups to keep their heads down” to prevent army bases from being overrun, Michon said.