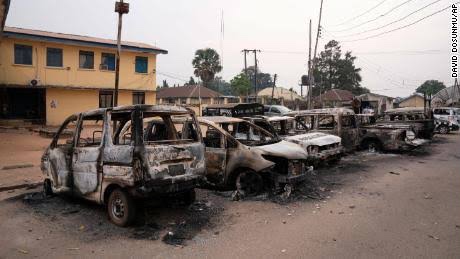 More than 300 prisoners reportedly fled the Kuje Custody Center, in the Federal Capital Territory of Nigeria, after a serious attack on Tuesday.

According to reports, Gunmen ambushed the Kuje prison near the Nigerian capital, where residents reported hearing several explosions.

“The Nigeria Correctional Service armed unit and other prison-affiliated security agencies have responded and calm has returned to the facility and the situation is under control,” a prison service spokesperson said in a statement.

Shuaib Belgore, permanent secretary of the Interior Ministry, told reporters outside the prison—which houses 900 inmates—that one security guard was killed, and three others were injured in the operation.

“They came specifically for their co-conspirators. Some of them are in the general (prison) population, so they escaped and other people in that population escaped as well, but many of them came back,” Belgore noted.

He added that more than 600 prisoners had escaped, but half had been recaptured, and a manhunt was underway.

“They reported themselves to the police as we successfully recovered some from the bushes where they were hiding and (so far) we have recovered about 300 of the roughly 600 that came out of the prison cells,” Belgore further noted.

The charred remains of several vehicles with bullet holes were seen outside the prison Wednesday morning, attesting to shootings nearby during the operation.

Attacks by gunmen on prisons trying to free detainees have become common in the West African country lately. More than 7,000 people escaped from prisons across the country between 2010 and 2021, according to an Al Jazeera analysis of media reports and official refugee figures.

Last April, more than 1,800 inmates escaped from Owerri prison in southwestern Imo state after gunmen blew up walls with explosives following a shootout with guards.

The latest incident came hours after gunmen ambushed an advance convoy of Nigerian President Muhammadu Buhari in the northern state of Katsina.

The president was not in the convoy at the time of the attack, which took place on its way to Buhari’s hometown of Daura, near the Niger border.

A statement from the presidential office said the attackers were “repelled by the military, police, and security guards escorting the convoy”.