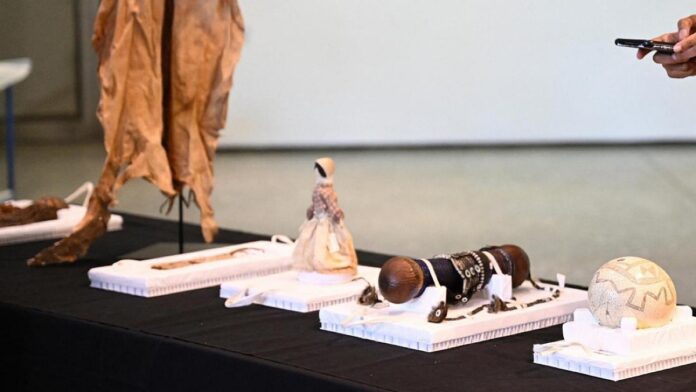 On an indefinite loan, a German museum has promised to return a collection of Namibian artifacts.

The ruling is part of a compensation package for a time of colonial control during which Germany perpetrated genocide against Namibians.

According to historical records, between 1884 and 1915, when Namibia was part of German’s southwest Africa and a colony of the German Empire, several artifacts were taken by force from the Namibian people and placed in German museums. However, the Berlin Ethnological Museum is set to repatriate 23 old pieces of jewelry and other artifacts to Namibia.

During the German rule over Namibia, insurrections from tribes such as the Herero, Nama, and San tribes became active, prompting an unfortunate slaughter of between 24,000 and 100,000 people. Sadly, those who were not killed by German forces were imprisoned in concentration camps, while others were forced into the desert to die of thirst.

Thankfully, a great step was taken towards healing when Germany and Namibia struck an agreement in 2021 that legally recognized Germany’s role in the genocide. Due to the agreement, Germany also agreed to pay reparations totaling €1.3 billion over the next 30 years.

The decision by the Berlin Ethnological Museum to return the Namibian artifacts is part of a broader effort to mend fences with the former colony. The Museum explained that “the collections reflect colonial, and in some cases extremely violent, processes of appropriation. They also show the creativity and ingenuity of the Namibian people.”

A vase with three heads, a doll dressed in traditional attire, numerous hair decorations, and spears are among the objects chosen by Namibian experts to be returned.

According to Esther Moombolah, director of the National Museum of Namibia, this is a step in the process of re-evaluating “the long and complex history between Namibia and Germany.”

She used the opportunity to call on all other prospective partners to follow the Berlin Museum’s lead. She noted that Namibians should not have to fly to witness their cultural treasures housed in museums around the world. Emphasizing that “importantly, the artifacts have not been returned indisputably; instead, they have been lent back to Namibia “indefinitely.”

The Prussian Cultural Heritage Foundation (SPK), which manages Berlin’s museums, did not provide an explanation for why the artifacts were not simply returned, instead it simply stated that the loan was “the method that had been decided.”

“The objects that belong in Namibia will remain in Namibia,” it hammered.

Along with this deal, the Ethnological Museum decided to restore its Benin Bronzes collection to Nigeria last year. The metal plates and sculptures were created between the 16th and 18th centuries and were used to embellish the Kingdom of Benin’s royal palace. They were once thought to be the crown jewels of the Berlin Museum’s collection.

The decision to restore so many valued antiquities to former German Empire territories contrasts with Britain’s attitude to masterpieces like the Parthenon Marbles, which are housed in London’s British Museum.

Despite agreeing to hold talks with the Greek government over the marbles, the British government has maintained its position that it will not act on behalf of the independent British Museum. Meanwhile, the Museum maintains that the marbles will not be returned unless a government act is passed.