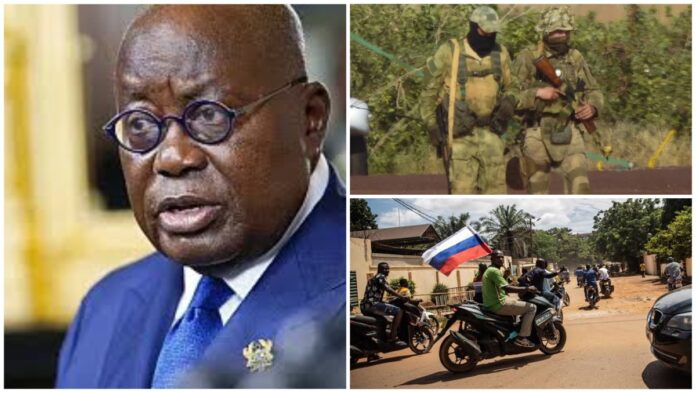 “Burkina Faso has now reached an agreement to use Wagner’s forces as Mali. I believe a mine in southern Burkina Faso has been set aside for them as payment for their services,” he said at a Ghana-US meeting.

According to the Ghanaian head of state, “Russian mercenaries are on the northern border” of Ghana, which is “particularly worrying”.

Burkina Faso government spokesman Jean-Emmanuel Ouedraogo told AFP: “We have no response. I hold him responsible for what he said.”

Several countries have accused Mali’s ruling military council of using the services of Wagner, who is known to be close to the Moscow regime, which Bamako denies.

Also, read; WHO Chief Says Uncle Was ‘Murdered’ by Eritrean Troops in Tigray

The question of a possible rapprochement with Russia has also been raised in Burkina since the Sept. 30 coup d’état, the second in eight months, that brought Captain Brahim Traoré to power, while the country has grappled with repeated deadly jihadist attacks since 2015.

When asked about the trip, a Burkina Faso government spokesman declined to comment.

Kelem von Tempel said in late October that he would not rule out re-examining his country’s “ties” with Russia.

“We will do our best to diversify our partnership relations until we find the right formula for Burkina Faso’s interests. But there will be no way to let one partner dominate us,” he said. On Thursday evening, the head of US diplomacy reiterated his concerns about the Russian group.