WHO Chief Says Uncle Was ‘Murdered’ by Eritrean Troops in Tigray 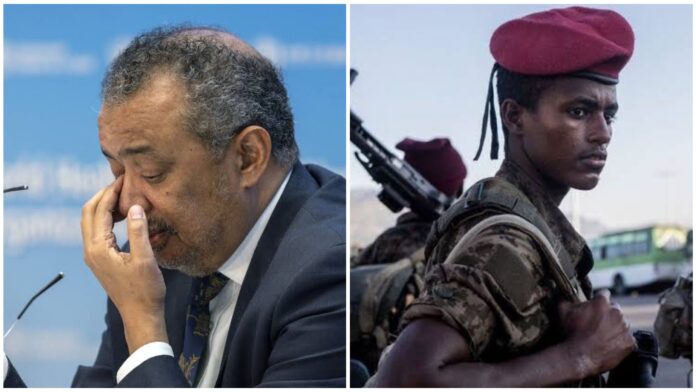 World Health Organization (WHO) director-general Tedros Adhanom Ghebreyesus said on Wednesday his uncle was “killed” by Eritrean forces in the Tigray region of Ethiopia, where a peace deal was signed to end a bloody war.

Tedros, who is from Tigray, announced at the end of a press conference with the United Nations Correspondents Association that he was canceling the meeting “because it’s been a difficult time for me”.

“I heard that my uncle was killed by the Eritrean army,” he told reporters.

“He was not alone. In the village, when they killed him in his house, they killed more than fifty people in the same village,” he denounced. “I hope the peace agreement holds and this madness stops,” added the 57-year-old chief of the World Health Organization.

Fighting began in November 2020 when Ethiopian Prime Minister Abiy Ahmed dispatched the federal army to arrest leaders in the northern region who had questioned his authority for months, accusing them of attacking federal military bases.

The Ethiopian government and the Tigray rebels signed an agreement in Pretoria on November 2 that would cease hostilities, withdraw and disarm Tigray troops, restore federal authority in Tigray, and reopen access to the region which is in distress, included humanitarian situation.

However, the agreement makes no mention of the presence of the Eritrean army in Tigray, which provided crucial assistance to the Ethiopian forces, or their possible withdrawal.

The outcome of this conflict, which was marked by abuse and largely behind closed doors, is unknown. The International Crisis Group, a non-governmental organization, called Amnesty International “one of the deadliest attacks in the world”.

Tedros Adhanom Ghebreyesus, who headed the regional health department in Tigray before becoming Ethiopia’s health minister from 2005 to 2012, has repeatedly called for peace and unhindered humanitarian access to Tigray.