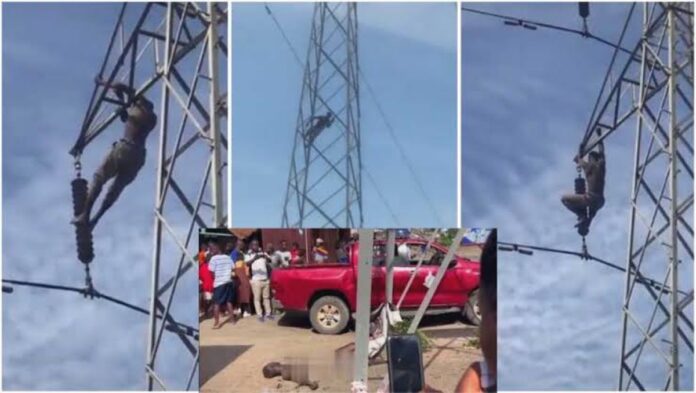 In a disturbing video that has since been circulating on various social media platforms, a Ghanaian Man was seen as he committed suicide on a high voltage GRIDCo transmission line over the economic hardship he claims he has been facing in Ghana.

The man is said to have climbed the Kasoa Galilea high voltage pole. Galilea is located past the Kasoa Tollbooth on the Weija to Kasoa route in the Ga South district of Greater Accra.

In a viral video caught by AtinkaNews, the man was seen quickly climbing the pole as onlookers made pleas to take him down.

A vehicle belonging to the Ghana Police Service was also seen in the video, giving the impression that officers were there to help get the man off his perch before he further endangered his life.

A viewer believed to be of Nigerian decent can also be heard commenting in the background of the video saying that a man from Ghana had climbed the pole because of the country’s need.

He later stepped on the transmission line and was electrocuted. The body has already been taken to the morgue.

The incident reportedly happened on Friday and the man has not yet been identified.