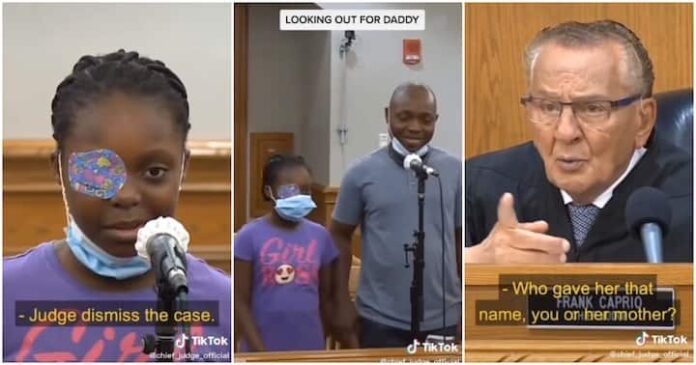 A young Nigerian girl called Tofunmi has been hailed on social media after she saved her father from a relatively harsh sentence in Court.

The young girl accompanied her father to an American court in Rhode Island, where he appeared to have been invited after breaking traffic law by moving across despite a red light.

The court case was televised and presided over by a famous American Judge, Francesco “Frank” Caprio, the chief municipal judge in Providence, Rhode Island. Tofunmi confidently and intelligently answered questions that led to the dismissal of her father’s case.

In a video now making rounds on social media, a Nigerian man was seen appearing before Judge Caprio after which the Judge noticed a young girl standing close to him.

As soon as the offender identified himself, the Judge immediately asked for the identity of the young girl standing next to him. Judge Caprio asked that the girl be allowed to a microphone of her own, where she was engaged in a conversation with the judge.

The judge Caprio asked a few questions and noticed that the young girl had her right eye covered with a patch. The judge asked about the situation with her right eye and was soon informed by the girl that she had gone to a doctor’s appointment for surgery.

Judge Caprio soon asked about Tofunmi’s father, who was accused of driving across a red light. He showed the young girl a tape of her father driving despite a red light.

After watching the video, Tofunmi admitted that her father did commit the offense and after a back and forth conversation, she stated that she was actually in the car while her father was driving and could describe the situation. Tofunmi described the events that led to her father driving across the road despite a stop sign.

The young girl who wants to be a doctor stated that her father was driving without paying attention to the red sign because she had to see a doctor for eye surgery.

This moved the judge, who then presented three ways the case could end up in. Judge Caprio said her dad could be fined $85 for the offense or charged a court cost of $35, or that the case may be dismissed due to the human angle to it.

The kindhearted judge then made the girl tell him to dismiss the case—a request he was more than willing to grant.