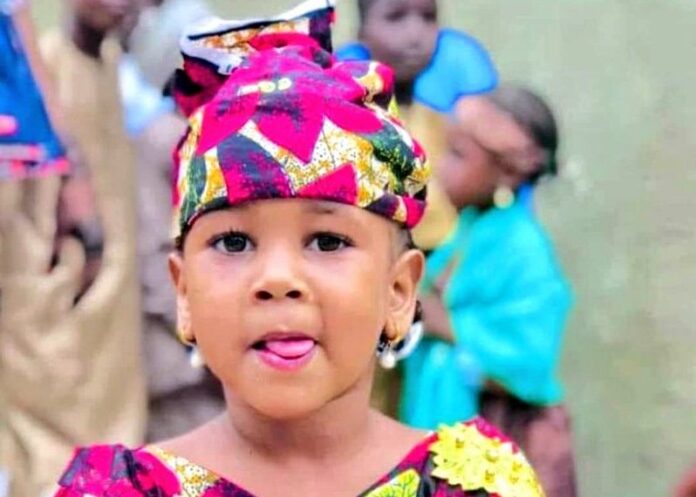 In a tragic turn of events, a 5 year old girl, Hanifa Abubakar was allegedly kidnapped outside the Islamic school that she attended. The discovery of her decomposing, has triggered shock and outrage across Nigeria, where the hashtag #JusticeForHanifa is currently trending.

The proprietor of her school, Abdulmalik Mohammed Tanko, has been arrested and the school establishment closed in conjunction to the Murder of the little girl.

Little Hanifa Abubakar was Mr Tanko’s pupil at a private school located in Kwanar Dakata in Nassarawa local government area of Kano State. According to the police, the principal suspect, who is the proprietor of the school; confessed to have poisoned the girl when he realized that she had recognized him.

Mr Tanko and his accomplice Isyaku then buried her remains in a shallow grave at the private school premises.

One Hashim “confessed that; sometimes in the month of November, 2021, the principal suspect, Abdulmalik Tanko met him and one Fatima Jibreel Musa; 27 years old, of Layin Falaki Tudun Murtala Quarters, Nassarawa LGA Kano State and ordered them to kidnap Hanifa. They planned but later rescinded their action. Fatima was also arrested.

According to the authorities, 34 year old Mr Tanko, led officers to the school premises where he had buried the schoolgirl’s body in a shallow grave.

Her remains were then exhumed for medical examination and a proper burial by her family.

Mr Tanko has not yet been charged.

Two other suspects have been arrested, police say.

Speaking in an emotional voice, the girl’s father Abubakar Abdussalam told  BBC the family was traumatised.

Hanifa’s mother is currently in hospital after she collapsed and fainted, he said.

He demands  justice from the authorities.

Kano state commissioner of education Sanusi Sai’du Kiru described the kidnapping as a betrayal of trust.

Nigeria is grappling with a wave of kidnappings for ransom, mostly by armed gangs who frequently target schools for mass abductions of students but the kidnapping of students by school officials is extremely rare.