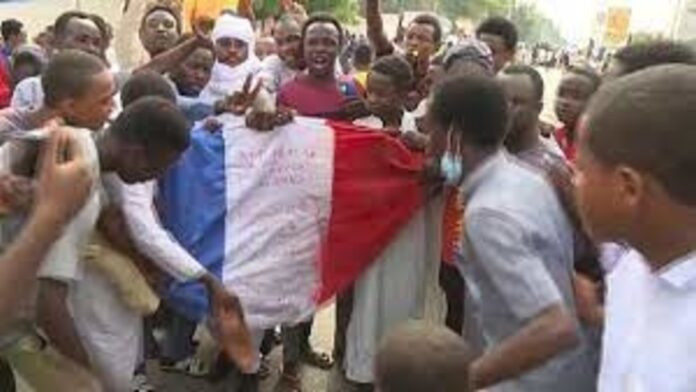 On Saturday, May 14, hundreds of Chadians took part in an anti-French protest organized by the opposition group Wakit Tama.

According to protesters, the French military has become too active in the country.

They expressed grievances on issues bordering on the French military and the continued ridership of the interim President Mahamat Idriss Déby Itno.

It’s has been on the seat as president since his father died in 2021.

One of such properties and businesses targeted we’re several Total has stations. Students and young boys filled the streets with motorcycles, screaming; “France get out.”

One of the protesters at the scene, Souleyman Tahir, spoke about the incident; he claimed that France has been meddling in their political affairs.

“We don’t know, now the whole Chadian territory is occupied by the French army. The French army is concerned with the wealth of Chad’s subsoil and not with the well-being of the Chadian people,” Tahir said.

Recall that the system of government ran by the ex-president, Idriss Déby Itno was an authoritarian dictatorship; a system which he ran for 30 years before his death on April 20, 2021.

The death of the late president was due to a rebellion in the country; one which he attempted to crush.

In response to his legacy; now passed on to his son, hundreds of Chadians have become aggrieved. In what seems more focused on an “anti-France” idea; several protesters took to the streets, destroying some French-linked businesses.

According to a representative for the Chadian civil society alliance, Wakit Tamma; the rally was called to criticize France’s support for the Transitional Military Council, which seized power following the death of President Idriss Deby on the battlefield in April 2021.

In recent times, countries in Africa whose colonial masters were the French have been experiencing great issues with France’s activities within their borders.

In countries such as Mali, Burkina Faso, and Niger; similar events occur leading to calls for stronger military ties with Russia rather than France.