Imhotep: The African Inventor of Medicine 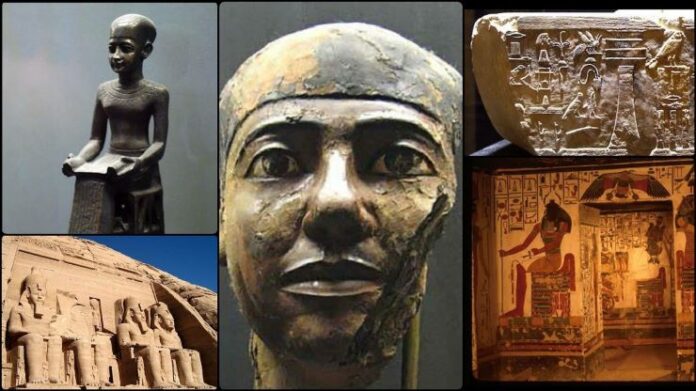 Most people think of white European characters when they think about historical scientists and doctors.

Few people pause to consider the inventions made by Africans, Asians, or Native Americans. Even Imhotep, the first historically known physician, is more famously known as the mysterious enemy in the Hollywood movie “The Mummy” because the representation of scientists of color is so deeply ingrained in culture.

Imhotep was a Black Egyptian practicing medicine and writing about the subject 2,200 years before the Greek physician Hippocrates, who is credited as the founder of modern medicine.

He was also known by his Greek name Imouthes who lived in Egypt between 2667 and 2600 BCE and is best known as the designer of King Djoser’s Step Pyramid at Saqqara.

Imhotep was a priest, a brilliant mathematician, writer, and doctor, and he established the Egyptian branch of astronomy and building studies.

Imhotep was a genuine person who existed in the third dynasty and served a king and was multifaceted (a genius in multiple subjects).

He is credited with creating the first human-built pyramid made entirely of stone, the Pyramid of Djoser at Saqqara, close to Memphis.

Egyptians were the actual pioneers of medicine, not Greeks

A research team from The University of Manchester’s KNH Centre for Biomedical Egyptology found the proof in medical historical documents from 1,500 BC, or 1,000 years before Hippocrates was born.

The Imhotep writings are typically regarded as the basis for the Edwin Smith Papyrus, an Egyptian medical document that lists 48 injuries and their treatments while containing nearly 100 anatomical words.

The manuscript is believed to be a duplicate of Imhotep’s earlier work and dates to around 1600 BCE, long after his time. It may have been a military field manual.

Researchers who have been examining texts from 3,500 years ago claim they have evidence that ancient Egypt, not Hippocrates and the Greeks, is where modern medicine first emerged.

Dr. Jackie Campbell remarked, “Classical scholars have long regarded the ancient Greeks, particularly Hippocrates, as the fathers of medicine, but the findings of the KNH study team reveal that the ancient Egyptians were practicing a respectable kind of pharmacy and medicine much earlier.

KNH observed that the prescriptions in the ancient manuscripts not only contrasted with pharmaceutical preparations of today but that many of the cures had therapeutic merit when they were assessed against modern pharmaceutical protocols and standards.

The medical records, which were originally uncovered in the middle of the 19th century, revealed that Egyptian healers used honey, resins, and antibacterial metals to cure wounds.
Imhotep was a kingly counselor, a builder of pyramids, and a paragon of knowledge before ascending to become the god of healing and science.

Imhotep insisted that knowledge could only be helpful if it was put to use for the benefit of everyone, unlike the Egyptian god Thoth who is not kind with his knowledge. His core belief is that magic, science, and knowledge should all be used to benefit humanity.

Although Imhotep did surgery and healed patients from over 200 maladies, including tuberculosis, gallstones, appendicitis, gout, and arthritis, magic and the use of herbs were the first kinds of “medicine.”

He was a dentist who could make diagnosis by examining the tongue, skin, hair, and nails.
Prior to Hippocrates, the renowned “Father of Modern Medicine,” by 2,200 years, Imhotep was a physician and author on the subject.

The Edwin Smith Papyrus, an Egyptian medical treatise with nearly 100 anatomical words and descriptions of 48 injuries and their treatments, is commonly credited to Imhotep as its author.

Although it was written long after Imhotep’s time, around 1600 BCE, and may have been a military field manual, the text is believed to be a duplicate of Imhotep’s earlier work.

Other sources demonstrate that hyoscyamus, which is still used today to treat colic, was once utilized as an intestinal carminative, as well as cumin and coriander.

More proof indicated that poultices were used to warm and relieve musculoskeletal ailments in addition to rubefacients to enhance blood flow.

They utilized pomegranate to treat tapeworms, a treatment that was still being used in clinical settings up until 50 years ago, and celery and saffron for rheumatism, both of which are today the subject of pharmaceutical study.

In spite of the fact that the active ingredient is now generated synthetically, many of the ancient medicines we found endured until the 20th century, according to Dr. Campbell.

Aloe vera is a foundational ingredient for the treatment of skin diseases, and acacia is still utilized in cough medicines.

In order to examine the ancient Egyptian therapeutic herbs, colleague Dr. Ryan Metcalfe is now developing genetic tools. In order to ascertain which modern species the old botanical samples are most linked to, he has designed his research in this manner.

This may help us pinpoint the plant’s most likely site of origin while also supplying more proof of trade routes, intentional cultivation, commerce hubs, or medical facilities, according to Dr. Metcalfe.

The research is closely related to cutting-edge chemical analyses carried out by Judith Seath, a colleague of Metcalfe’s who specializes in the essential oils and resins utilized by the ancient Egyptians.

These results are quite significant and suggest that the ancient Egyptians were practicing a reliable kind of pharmacy long before the Greeks,” stated Professor Rosalie David, Director of the KNH Centre.

The history and historical narratives of Africa have been modified or some what destroyed by European colonialism.

A false narrative that claimed that Africa was a backward continent populated by primitive, barbaric people who had no history was propagated in order to justify the enslavement of Africans.

If the world was aware of the tremendous empires and achievements of diverse African communities, it would have been impossible to defend slavery.

Hollywood has distorted black history through propaganda, for example by portraying Egyptians as white or at the very least as anything other than black. Elizebeth Taylor played Cleopatra, and Charleston Heston played Moses.

Slaves were the only people of color ever depicted in Egyptian-related media.

Unfortunately, both the 1932 performance by Boris Karloff in “The Mummy” and the 1999 performance by Arnold Vosloo have skewed and fabricated Imhotep’s greatness as a terrible figure.

It is crucial that as a culture we value all the work of scientists and other historical figures, not just the white men. Asian and African-American innovators are pivotal in the history of science, and it is important that they be recognized for their contributions.