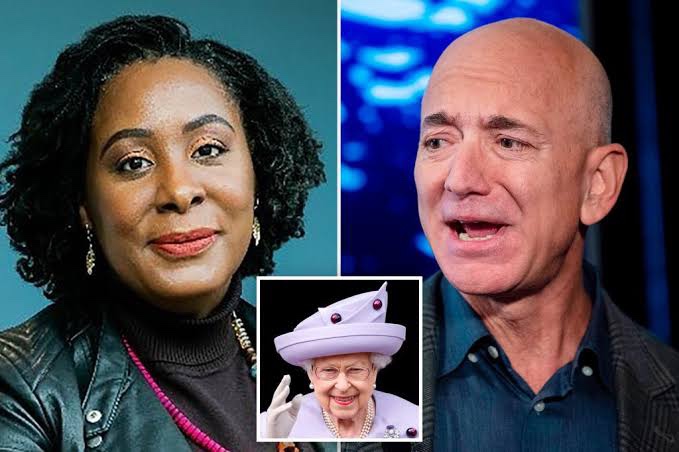 A Nigerian professor from Pennsylvania, Uju Anya, exchanged words with Amazon founder, Jeff Bezos about the death of Queen Elizabeth II on Thursday.

Uju made some scathing and inappropriate comments about the British monarch following news of her near death situation.

In a now-deleted tweet, she wrote; “I have heard that the supreme monarch of a thieving, raping and genocidal empire is finally dying. May her pain be excruciating.”

Bezos, who came across her tweet and found it distasteful, described her as a speaker charged with making the world a better place.

He quoted her tweet and wrote; “this is someone who is supposed to work to make the world a better place? I do not think so. Wow.”

But in response, Uju rained down insults on the Forbes billionaire, both in Igbo and English.

“Otoro gba gbue gi. May all who have been wronged by you and your relentless greed in this world remember you as fondly as I remember my colonizers,” she wrote on Twitter.

The Queen ascended the throne in 1952 and experienced enormous social change.

A September 8 statement from Buckingham Palace said: “The Queen died peacefully at Balmoral this afternoon.

“The King and Queen will remain at Balmoral tonight and return to London tomorrow.”

After her death, Prince Charles, her eldest son and former Prince of Wales, will lead the grieving country as the new king.

The BBC reports that the monarch’s family gathered at their Scottish estate on Thursday 8 September amid growing concerns about her health.

Doctors had already placed the Queen under medical supervision and by this time all her children were traveling to Balmoral, near Aberdeen.

Queen Elizabeth II’s tenure as head of state spanned the period of post-war austerity, the transition from Empire to Commonwealth, the end of the Cold War and Britain’s entry and exit from the European Union.

Her reign spanned 15 prime ministers, starting with Winston Churchill, born in 1874, and including Liz Truss, who was appointed by the Queen earlier this week.

The Queen was born Elizabeth Alexandra Mary Windsor on April 21, 1926 in Mayfair, London.