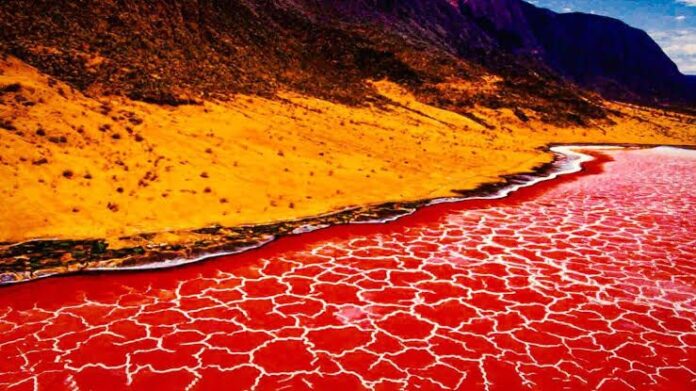 Tanzania’s Lake Natron is a unique lake compared to other lakes in the world.

The first thing you’ll notice about Lake Natron is that it’s red with hints of orange and pink.

Well, although this is a distinctive characteristic, that’s not the only thing that makes Lake Natron unique.

Another characteristic that makes Lake Natron unique is the fact that it is extremely caustic (alkaline) due to the surrounding volcano making the Lake poisonous to animals.

Also, the alkaline water of this lake has a pH as high as 10.5 which can burn the skin and eyes of animals.

This is why if you ever visit Lake Natron, you will find quite a number of dead animals there.

The lake calcifies any birds that dive in. This indicates that the salt in the lake hardens their bodies, giving them the appearance of the stone.

The causes of this phenomenon are sodium carbonate and sodium bicarbonate. In actuality, Egyptians mummifies their deceased using these two items.

The water’s alkalinity comes from the sodium carbonate and other minerals that flow into the lake from the surrounding hills.

The presence of sodium carbonate and other components is what calcifies these birds when they dive into Lake Natron.

In fact, research shows that these minerals are also what Egyptians use to mummify dead bodies.

Lake Natron is located about 100 kilometers northwest of the town of Arusha, in northern Tanzania, is Lake Natron.

The lake’s length from north to south is 56 km, while its width is approximately 24 km. A little piece of the lake, specifically its northern tip, is located in southern Kenya across the border.

The water in the lake doesn’t flow out as it does in other lakes; instead, it keeps accumulating. Plus, the region gets extremely little rain as well.

The lake’s temperature can increase to 60 degrees Celsius and high levels of salt are left behind after the water evaporates.

Its red color is from the proliferation of haloarchaea, salt-loving microbes, in this hypersaline environment.

However, with these deadly characteristics, some fish and invertebrate species can survive in the lake’s outer region and this is because their bodies have been made to adapt to such pH levels.

Such birds that can survive in Lake Natron are the Flamingos. The Flamingos live in the lake and prosper there without any problems.

In fact, the lake serves as the largest breeding place for lesser flamingos—more than 2 million—in the entire world.

These flamingos are able to feed off the blue-green algae that grow in this lake. The cyanobacteria in the lake do not have an adverse effect on some other aquatic birds, such as storks.

Lake Natron is one of two alkaline lakes in the East Africa region. The other is Lake Bahi.

Both are terminal lakes that are supplied by hot springs and little rivers but do not flow into any rivers or the ocean. Their water temperatures, which are high for shallow lakes in a hot area, can get as high as 106 degrees Fahrenheit (41 degrees Celsius).