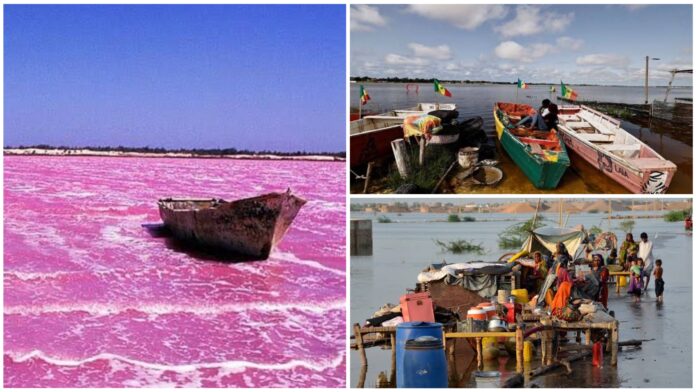 After days of torrential rain, local miners and citizens have had to watch in desperation as floodwaters breached a meter-wide crevasse on the shores of Senegal’s Pink Lake, washing away thousands of dollars in mounds of salt.

Senegal, like other countries in the West and Central African region, has experienced above-average rainfall in recent weeks, triggering devastating flooding after poor drainage systems failed.

“This is the first time I’ve seen this. I lost a lot of money with my salt being washed away and dissolved by the water,” Diare, a local salt miner said on Tuesday.

The lake, separated from the Atlantic by a strip of dunes, is about 35 km from Senegal’s capital, Dakar. It is one of the most visited sites in the country and is listed as a UNESCO World Heritage Site.

Officially known as Lake Retba, it gets its pink hue from an alga that produces the colored pigment and, like the Dead Sea, is also known for its high salinity.

Diare is one of more than 3,000 people who live off the lake, including hundreds of divers who manually remove salt from the lake’s bottom, producing around 38,000 tons a year.

Also, read; S.African Cheetahs to be Flown to Mozambique, India as Part of Reintroduction Efforts

As sustained rains drenched Senegal, with about 126 millimeters (5 inches) recorded over a period last weekend, drainage systems and retention basins were quickly overwhelmed, channeling floodwaters into the lake, according to the Ministry of Water and Sanitation.

According to Senegal’s Civil Aviation and Meteorological Agency, rainfall above 50mm is considered “extreme” in the country.

When the rivers reached the lake, the water level rose, washing away dozens of mounds of salt, said Babacar Ba, another miner trying to save his remaining mounds.

Abdoulaye Faty, a hydrologist and professor at Cheikh Anta Diop University in Dakar, told Reuters that rising water levels in the surrounding highlands had naturally drained into the deep lake.

As the lake has received large amounts of flooding, this could affect its salinity and color, he added.

A month before the end of Senegal’s June-October rainy season, other businesses around the lake, including restaurants and operators of flat-bottomed boats that take tourists on lake cruises, are counting their losses and worrying about the future.

“What attracted visitors was the sensation of floating on the surface of the lake due to its salinity. Nobody can swim here at the moment,” said Abdou Seye Dieng, who runs a camp on the coast.