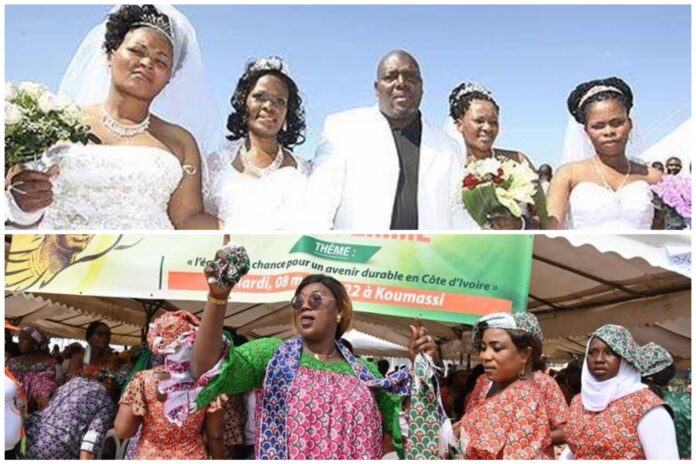 A bill in Côte d’Ivoire’s parliament that would legalize polygamy—but only for men—drew a backlash from women’s rights activists, who described it as a setback in the fight for equality.

Polygamy is widespread in Côte d’Ivoire, throughout the region and irrespective of religious background. Men have multiple wives, and communities accept that. These obvious statistics informed the decision by some members of the nation’s parliament to introduce a bill legalizing the polygamous nature of marriage.

However, the bill has since caused a wildfire of controversial responses and reactions, especially from women’s groups and activists who responded unkindly to the proposed bill.

“We cannot legalize polygamy to satisfy a man’s libido,” says legal expert Désirée Okobé bluntly. Okobé, based in Abidjan, is one of the women who opposed MP Yacouba Sangaré’s bill to legalize polygamy in the West African country.

“A man chooses to have more than one wife for personal and selfish reasons. Opening that door would end up creating an imbalance in our society,” says Okobé in a telephone interview.

According to her and several women’s rights activists in the country, legalizing polygamy would be a setback for Ivorian women, who still face systemic inequalities and discrimination.

The UN Commission on Human Rights considers the practice discriminatory against women and has called for its eradication.

“So exclusive monogamy doesn’t fit our realities, our customs. We cannot simply copy and paste laws introduced in Western countries. We have to give people an opportunity,” she argues.

Research has shown that before the arrival of settlers and Christianity in parts of Africa, polygyny—which allowed men to have more than one spouse—existed in family law. It helped prevent divorce due to infertility and was a response to an imbalance in the female to male ratio.

Sangaré says the intention behind the project is to protect women who do not have legal rights in “traditional” marriages.

A June 2019 law states that “no one shall enter into a new marriage until the first one is dissolved” and that only state officials have the power to legalize a marriage.

The law thus invalidated traditional marriages, where a contract is often made for a dowry. When the relationship ends, women are not entitled to any compensation from the partner.

“Legislation is necessary to protect women. If the partner dies, they remain in this legal vacuum,” says Sangaré. He further argued that monogamy “encourages” divorce, as men who want multiple partners are more likely to leave their wives and families when polygamy is not allowed.

Okobée agrees that more legislation is needed to protect women, but rejects the idea that this bill was drafted with women’s interests in mind.

“It’s an excuse to justify the unwarranted. This isn’t for women. It’s about men asserting themselves,” she says.

Women’s rights organizations in Côte d’Ivoire say they will fight the law and do whatever it takes to prevent it from becoming part of the law. Former Solidarity and Women’s Rights Minister Constance Yai was one of the most vehement critics of Sangare’s plan.