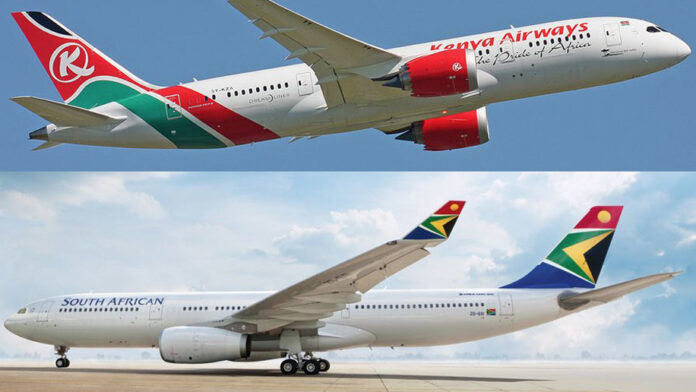 Kenya and South Africa Plans to take Pan-Africanism to the next level as Uhuru Kenyatta, Kenya’s President announced that the national airline of his country and that of South Africa will merge to establish a Pan-African Airline.

This came with the occasion of the signing, attended by President Uhuru Kenyatta and his South African host, President Cyril Ramaphosa on the second day of President Kenyatta’s 3-day state visit to South Africa.

Kenya Airways chairperson Michael Joseph said that the partnership will contribute to the vision of the Africa Continental Free Trade Area by easing travel between the East and Southern African countries.

According to Uhuru Kenyatta, during his New Year address to the country on Friday, the last day of December, 2021, the move is equally aimed towards continental integration.

“To boost tourism, trade, and social engagement; and to bolster continental integration; our national carrier Kenya Airways will join hands with our partners in South Africa to establish a Pan-African Airline,” Kenyatta said.

Both companies remain committed to their financial recovery strategy. A major factor to achieve this is to share and combine assets to provide a stronger and more competitive airline environment that will pursue the financial and commercial viability of the duo.

According to Michael Joseph, the partnership will contribute to the vision of the Africa Continental Free Trade Area by easing travel between the East and Southern African countries.

In a joint statement, the two Airlines stated: “One of the pillars to achieve this is coming together and combining assets to provide a more robust and ultimately competitive aviation ecosystem to pursue the commercial viability of both carriers.”

They added that, “The partnership will improve the financial viability of both airlines by creating the most formidable air transport connection in Africa.”