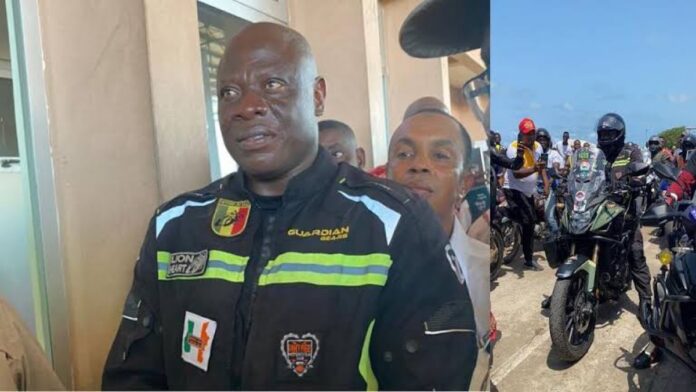 Kunle Adeyanju, a Nigerian biker who set out on a London to Lagos journey in April this year, has arrived in Lagos to the delight of his supporters all over the world.

Before embarking on the journey, Adeyanju, who went by the moniker “Lionheart,” stated that his goal was to raise awareness and funds to eradicate polio in Africa.

Throughout the journey, a social media-aware Kunle kept his teeming and growing fans updated by posting about each stop, the difficulties he encountered, and the challenges he faced.

According to sources, his journey brought him through France, Spain, Morocco, Senegal, Mali, Ghana, Benin Republic, and Cote d’Ivoire before arriving in Lagos, Nigeria.

He was greeted with a loud and heartfelt welcome by bikers and his supporters who had followed his voyage via Seme, a community on Nigeria’s border with the Benin Republic, until he arrived in Badagry in Lagos State.

Recall that we had earlier reported that while dozens of people reacted positively to Adeyanju’s “charity expedition,” Twitter CEO Parag Agrawal appeared to take a liking to the Nigerian, especially given that his excursion from London to Lagos on a motorcycle is to raise awareness about polio.

Kunle’s voyage into Africa began on Tuesday, April 19th, when he departed London. The Nigerian kept the rest of the globe up to date on his travels by posting images of himself arriving in various African countries and towns.

Adeyanju’s “updating outlet” was Twitter, where he posted photographs and interesting captions about his location and destination.

Over the course of his journey, Adeyanju amassed at least 80 thousand Twitter followers on his travel, a laudable feat that allowed thousands to follow his adventure as he published updates about his encounters.

We also learned that upon his arrival in Ghana, Kunle Adeyanju went straight to the Ghanaian Twitter office, where he was greeted by a Twitter staff that had apparently been following his postings on the website. Several photos of Adeyanju at work, including one of him posing with the Twitter team, have surfaced online.