Landslide Kills at Least 14 at Funeral in Cameroon 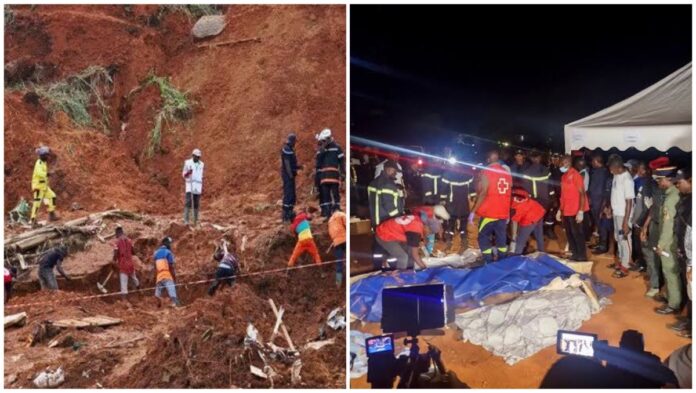 The regional governor said a landslide during a funeral service in the Cameroonian capital killed at least 14 people while rescuers continued to search for dozens more missing.

The disaster happened on Sunday when people gathered on a soccer field at the foot of a 20-metre high land bridge in Yaoundé.

Witnesses told Reuters the bridge collapsed on dozens of people.

“On the spot, we counted 10 bodies, but four bodies had already been removed before we arrived,” said Paul Bea, governor of the central region, to which Yaounde belongs.

Also, read; Afrobeat Singer, Davido Spotted for The First Time In Public After Death of His 3-year-old Son

“There are also dozens of serious cases that are spread out in hospitals,” he said.

The governor described the area where the landslide occurred as a “very dangerous place” and encouraged people to stay away from the Damas area on the eastern outskirts of Yaoundé.

Among the survivors was 50-year-old Marie-Claire Mnduja. “We were dancing when the ground collapsed,” she told AFP.

She said “I was digging with my hands” to get people out of the basement and it was still covered in brown mud from the site.

Landslides are relatively common in Cameroon, but rarely as deadly as they were in Yaoundé on Sunday.

43 people died in the western town of Bafoussam in 2019 when a landslide caused by heavy rain destroyed dozens of makeshift homes built on a hilltop.