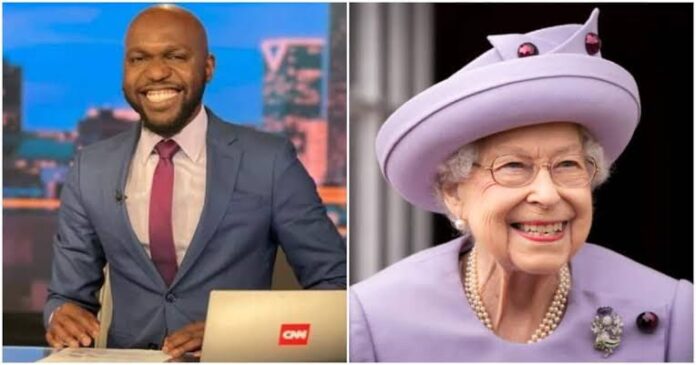 CNN’s International correspondent, Larry Madowo was placed under investigation by Twitter for his tweets about how Africans viewed Queen Elizabeth.

This comes after the journalist claimed in a social media post on the same platform that people didn’t like it when Africans told their own stories in response to Twitter’s investigation notification.

“According to German law, Twitter is obliged to notify users who are reported by people from Germany via the NetzwerkDG reporting stream. We received a complaint about your account for the following content…” the notice reads in part.

The content mentioned was a tweet Larry posted on Friday, September 9, 2022, about the death of Queen Elizabeth II and how Africans hold some sort of negative view about her.

Although Twitter has since dismissed the reports, social media users, especially Africans have reacted to what they believe is an attack on their ability to express themselves as it concerns colonial past.

“Queen Elizabeth was not universally loved in Africa. My CNN live report on colonialism, fairy tales and the Africans who refuse to mourn their deaths,” Madowo captioned his report.

Also, read; South African Women Cry Out Due To Shortage Of Contraceptives In Public Health Centers

Many responses to his CNN report confirmed Larry’s position and in his comments claimed the Queen was complicit in the colonialism of several African countries, complicit in the theft of African wealth and artifacts; and racism during her 70-year reign.

“Just because someone didn’t ‘start’ something or put certain institutions in place, if, from a position of power, you have 70 years to denounce the past, or attempt to right the wrongs and you don’t, please don’t expect the wronged to ‘mourn’ in the way you *think* they should.” Carmet TS responded to Larry’s report.

“Please, what time is appropriate? Don’t you have the right to tell the victims of colonial oppression when is the right time to express their pain?” said Gbenga Aborova.

“Nobody said it was obligatory to mourn her death. But for the sake of those who loved her, let them grieve in peace. Nobody is perfect, but once someone is gone, keep your bad feelings to yourself, they can only hurt those left behind and you will gain absolutely nothing!” Phiwayinkosi Buthelezi added.

Twitter’s investigative statement also said that Larry’s report on CNN was investigated and determined that under Twitter’s rules it cannot be removed.

“Interesting that when people from other countries complain you are not informed of their complaint, it seems to be a matter of German law that they have to tell you as the subject of the complaint. I am British and in mourning, and I can say that your well-handled report has not upset me,” wrote Ben Roberts.

“They colonized us, mutilated, humiliated, exploited and enslaved our ancestors. We will never forget! We cannot mourn our colonizers!” wrote Kawangware Finest (Moturi).

“So when you report facts, they want you to retract the information, but when it came to ‘perceived’ election violence, these international media could be the headlines of the news anywhere. Even without confirming the message,” Idris Mike wrote.

“The truth hurts! But we are not mourning the Queen yet, we are mourning Dedan Kimathi who was killed by them for standing up for the truth and what is right,” Dan Chumba wrote.