Liberia Seize and Destroy $100 Million Worth Of Cocaine 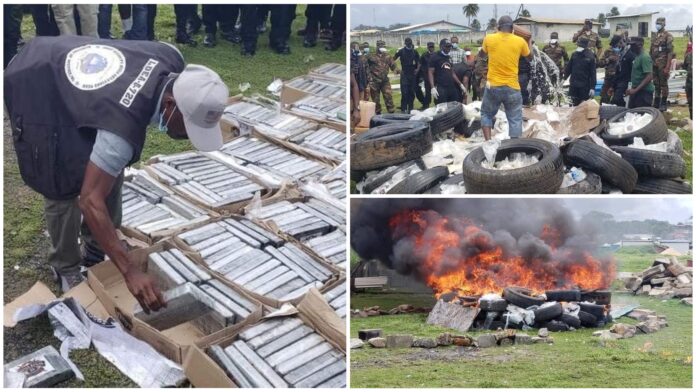 The Liberia Drug Enforcement Agency (LDEA) has destroyed huge quantity of illegal narcotics said to be worth at least $100 million.

Officials in Liberia said on Monday they had seized $100 million worth of cocaine with the help of the US International Drug Enforcement Agency.

Liberian Justice Minister Musa Din told reporters that the National Narcotics Agency, with the assistance of the Bureau of International Narcotics Affairs and Law Enforcement, made arrests and seizures on Saturday in the village of Tuboe, the western suburb of the capital Monrovia.

He said the operation resulted in “possession of $100 million worth of pure cocaine”.

He added that a suspect from Lebanon and another from Guinea-Bissau had been arrested.

The drug agency could not confirm rumors on social media that the drug was stored in containers designated for frozen fish. It was said, however, that investigation into the case is still ongoing.

Marcus Zhihu, head of the DEA, said a “thorough investigation” was underway and a search for fugitive accomplices was underway.

The US Embassy in Liberia congratulated the Liberian authorities on the drug shipment and said in a statement that it came as a result of rapid joint action.

“The success of this operation is a direct result of excellent communication between law enforcement agencies around the world, including Brazil, the United States, Liberia and others,” he added.