Mass Burial Held in Tanzania For 19 Victims of Plane Crash 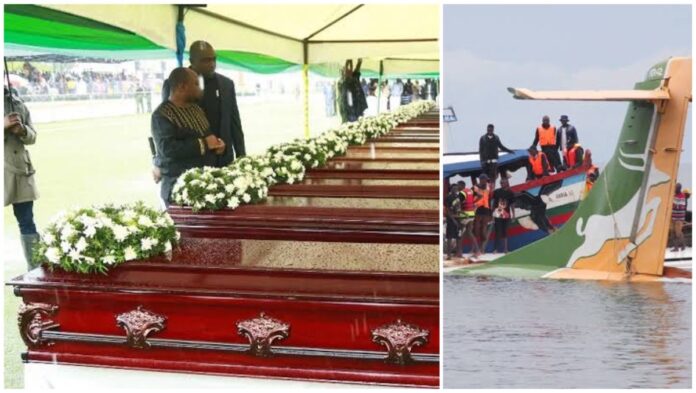 On Monday, Tanzania held a mass funeral for the 19 victims of a plane crash In Lake Victoria on Sunday.

The special Funeral was attended by the country’s prime minister, Kassim Majaliwa who noted during the service that after the unfortunate crash at the coastal city of Dar Al Salam, 26 people were saved.

According to information from local authorities, at least 26 people were saved from the crash, pulled out of the Lake, and transferred to the hospital where they have since recovered.

The minister added that two of the victims who sustain severe injuries are currently in the hospital where they are recovering.

Police said the plane flew about 100 meters (328 feet) when it was confronted with problems and bad weather.

The company, on the other hand, noted that the aircraft which was faced with serious malfunctioning and bad weather as stated by local police was an ATR 42-500 with 39 passengers including an infant and four crew members.

As seen in video footage published by local media, the plane which had been submerged in the lake had dozens of first responders and fishermen attempting to rescue victims of the crash.

Rescue professionals tried to take the aircraft out of the water using the strings with the help of cranes, as residents also sought help.

President Samia Soloho Hassan expressed his condolences to the families of those affected by the accident.