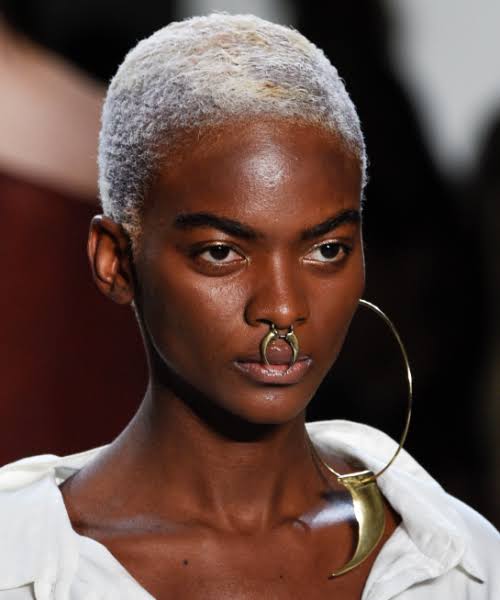 We all know Black models are elegant and gods and goddesses. However, we only mostly learn about models from south Sudan. Which is because of the very distinct physiques of people from Sudan which makes them automatic models from birth. Nonetheless, there is a model, from Haiti who is took the 2018 fashion week by storm. Her name is Aube Jolicoeur.

Aube jolicoeur broke into the model/fashion industry at age 26. An age which is considered late for models. But as you can see, black don’t crack. She is now 28 years old. To begin, Aube strutted her stuff at Jeremy Scott’s show. The eccentric designer styled Aube; (along with all her castmates) in an electrifying blunt bob wig. She stunned onlookers as she sashayed down the runway.

Walking in the Bottega Veneta show, Aube had all eyes on her donning a powerful burnt orange pantsuit and a fierce attitude to match. Aube is well known for her signature smize and ability to connect with the camera; through effortless body movements and facial expressions.

Not Just A Model

Aube also lends her voice on other issues. Here’s what she had to say about how her plans for charity;

“I want to help the poor and eventually start my own charity to help end poverty and homelessness. I want to mainly start off working on finding jobs and shelters for people without homes to help them get back on their feet. That’s one cause I’m very passionate about. I’m a very sensitive person and I love helping others. Just walking down the street and seeing a homeless person, I will legit just break out in tears. I want to do something about it one day. I don’t trust donating to huge organizations, and find it more rewarding and impactful to go to the people in need and help them in person.”

Born in Jacmel, Haiti, and raised near the famous Bassin Bleu, Jolicoeur spent her early years immersed in outdoorsy pursuits, “surrounded by waterfalls and mountains.” When she was 9 years old, her family settled in Kentucky, where she threw herself into her first love, dancing. “While my family couldn’t afford to put me in dance class, I learned my own way,” says Jolicoeur, whose rhythm is evident in her distinctive walk. “To this day, you can always find me dancing.” She later developed into a champion runner—she still holds the speed record at her old high school—and once friends and neighbors began to suggest she model, Jolicoeur decided to give it a go, even though getting seen by an agency required a few road trips to Cincinnati. “It was the only place I could actually experience things remotely close to modeling,” she says.

Though she was determined to make a name for herself, Jolicoeur experienced setbacks along the way, including a life-altering car accident that left her with a crescent-shaped scar on her forehead. “The doctors said I was lucky to survive being struck by a car while crossing the street,” she says. She moved to New York at 20, and her career kicked into high gear after she made the choice to wear her hair natural.

Off the runway, Aube is an emerging actress, with leading roles in ‘Afrimericans’ (2016 TV series) and ‘The Arrangement’ (2017 Pre-production movie). Beyond New York City, Aube has a contract in our native Cape Town with TOPCO MODELS.