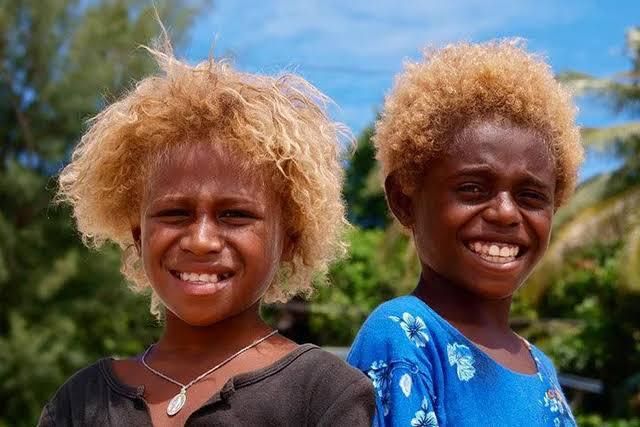 We can all agree that when thinking of the hair color of black people, blonde doesn’t come to mind.

Well, that isn’t the case for the Melanesians.

The word “Melanesia,” is derived from the Greek word which means “the island of black” and this term was first used when the European explorers first arrived on the island around 1832.

Melanesians are the black South Pacific islanders who migrated from Africa thousands of years ago.

The ancestors of the modern Papuan people were probably the first residents of the archipelago of islands that is now known as Melanesia.

The Melanesian population draws attention from the world because of their dark skin and blonde hair color.

Numerous explanations have been offered for how their blonde hair came about including genetic inheritance from mixed breeding with the Americans and Europeans who created the island.

It’s assumed that sun and salt bleaching, heavy fish consumption contributes as a major factor of their blonde hair color.

Sean Myles, a geneticist at Nova Scotia Agricultural College in Canada, conducted a genetic analysis on the hair and saliva samples taken from about 1200 Melanesian Solomon Island residents.

He discovered that the blondes have two copies of a mutant gene that is found in 26% of the island’s population by comparing 43 blond Islanders to 42 brown Islanders.

Melanesians have a native TYRP1 gene that is completely different from Caucasians’ genes because it does not exist in theirs and contributes to their blond hair and melanin.

This is why many children are born blonde, but by age ten, their hair usually darkens significantly, due to increasing levels of eumelanin, a type of melanin that regulates hair and skin pigmentation.

This is also the reason why many black babies are born with fair skin, but gradually get darker as they grow in their early stages.

Also read: A Blind Autistic Slave Who Became the Highest Paid Pianist of His Time

The sub region of Oceania also known as Melanesia stretches from the westernmost tip of the Pacific Ocean to the Arafura Sea and then eastward to Fiji.

The majority of the islands to the north and northeast of Australia are included in this region, along with those belonging to Papua New Guinea, Fiji, Vanuatu, Solomon Islands, and New Caledonia.

The two nations with a primarily Melanesian population are New Guinea and Fiji. Melanesians also occupy the region that is populated by New Caledonia, a unique French-speaking joint nation and they also reside in Indonesia’s eastern province.

Melanesians’ predecessors are said to have been related to the Proto-Australoid, the forefathers of the Australian Aboriginal tribe. Proto-Australoid are thought to have had dark skin, curly or wavy black hair, and thin build bodies.

They are described as the hunter-gatherer ancient people that originated from Africa.
Proto-Australoid, the forefathers of Melanesians, fled their home continent of Africa many years ago. In addition to spreading across Australia, they dispersed to southern and eastern Asia.

History claims that the region between Australia and New Guinea was connected by a land bridge at that time due to the Ice Age effect’s low sea level. As a result, early Melanesian populations were able to travel between continents.

The majority of the population of Indonesia is Melanesian, which is a member of the Mongoloid racial group, as it is widely recognized.

However, anthropologists from the National Research Center have established that Indonesia, particularly the eastern region, is home to 80% of the world’s Melanesian population.

Following their departure from their places of origin, Melanesians have lived in the Indonesian region for a long period. The archeological artifacts and ruins discovered in the Papua region serve as proof.

The Melanesians began to develop agricultural methods and pick up maritime voyaging skills in their new home.

The tribes interacted with the Mongoloid races that inhabited the Melanesia region while residing in the eastern parts of the Indonesian archipelago.

In contrast to the Malay and Javanese people in the western portion of the archipelago, who primarily practice Islam, Melanesians living in eastern Indonesia predominantly practice Christianity.

Prior to contact with Europeans, the indigenous Melanesian people engaged in cannibalism, head hunting, kidnapping, and enslavement similar to the Asmat tribe. However, the community is now predominantly Christian.

Instead of villages, Melanesians typically reside in homesteads and hamlets. In coastal communities, particularly those in the Pacific, this is a common practice.

In order to be close to one another in case of attacks, their community often have fewer than 1,000 residents in each town.

In order to maintain vegetation, engage in hunting, and live a normal island lifestyle, many groups also live inland and on slopes, ridges, and peaks. This helps to also protect themselves from prospective island invasions.

Women are highly regarded and adored in Melanesian society. They are responsible for ensuring the survival and development of their community. In addition to being chief administrators in domestic politics, healing, and ritual, they are the primary agricultural producers.

The Pacific Islands are primarily covered with rainforests, and Melanesians take full advantage of what these trees have to offer.

Their main crops include leafy greens, sugarcane, yams, taro, plantains, and sago (spices). Because they live at high altitudes, they are also well recognized for producing a lot of sweet potatoes. Along with agriculture, people engage in hunting and fishing.

Shells, salt, beads, and stones are abundant along the Melanesian shore, and they are frequently traded with neighboring nations. They manufacture bags and nets out of bush fibers and use them for hauling, fishing, hunting, trapping, and foraging.

They also use bamboo as a natural resource to produce torches, carving knives, water containers, and cooking utensils. The Melanesian people frequently employ canoes because they are crucial to their trading methods.

In Melanesia, ancestry has a significant role in religion. They consider human existence to be unpredictable and they attribute much of their success to the help of the spirits of their ancestors, which are summoned by prayer and sacrifices.