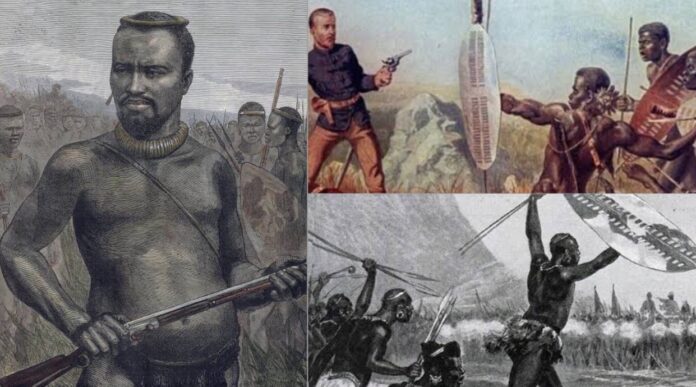 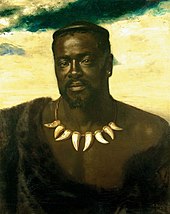 These are the words of the Zulu King, Cetshwayo Ka Mpande. He was a king who reigned between 1873 and 1879. He fought and won the famous battle Islandlwana against the British.

Cetshwayo Ka Mpande was responding to a supposed British missionary who was telling him to allow the British to colonize his kingdom and its resources or go to hell.

Cetshwayo Ka Mpande was the leader of the Zulu kingdom and its leader during the Anglo-Zulu war of 1879. 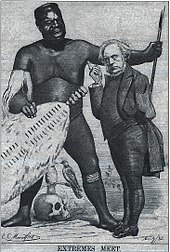 He was known for consistently opposing war. He sought fruitlessly to make peace with the British. The Zulu King was defeated and exiled following Zulu’s defeat in war. He returned to Zululand where he spent his final days and died in 1884. 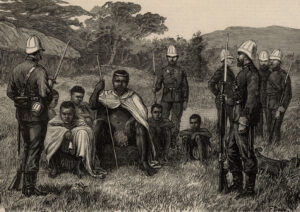 Origins of the Zulu king

Cetshwayo was the son of Zulu king Mpande and Queen Ngqumbazi. He was also the nephew of Zulu king Shaka and the grandson of Senzangakhona.

He defeated and killed his younger brother, Mbuyazi, in battle in 1856 at the battle of Ndondakusuka. All his brothers’ followers were killed when the battle ended. This list included five of Cetsshwayo’s brothers.

After this, he became the ruler of the Zulu people. But not in name, because his father still sat on the throne. Cetshwayo was said to be huge and as tall as six feet six inches, he weighed as much as 160 kg.

He still had a rival, one of his brothers, Umthonga. The Zulu King also paid attention to his father’s new wives and children for potential rivals. He ordered the death of his father’s favourite wife and children in 1861. 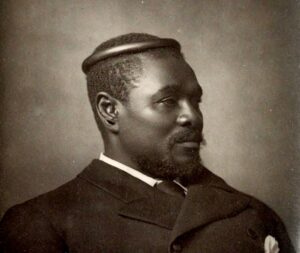 Two sons escaped but the youngest one was murdered in the presence of the king. The remaining rival, Umthonga, fled to Boer’s side of the border and Cetshwayo made deals to attempt to get him back.

In 1865 Umthonga play a trick on Cetshwayo. His intention was to make Cetshwayo believe that he would organize help from the Boers against Cetshwayo. This was the strategy his father had used to defeat a predecessor, Dingane.

There was the complication of another half-brother, Uhamu Kanzibe, he was a known betrayer of the Zulu cause.

The Reign of Cetshwayo

Cetshwayo began his reign in 1875 after the death of his father. Mpande died in 1872 but his death was concealed to ensure a seamless switch of kings.

On September 1, 1873, Cetshwayo was enthroned as king.

Sir Theophilus Shepstone crowned Cetshwayo in a sloppy affair that could be interpreted as a farce.

According to custom, he established a new capital and called it Ulundi, meaning the high place. He strengthened the army and integrated some strategies employed by Shaka. Cetswayo bought muskets for his team although there is not much proof of their use in history.

He banished the missionaries of Europe from his land and incited other African peoples against Boers in Transvaal. 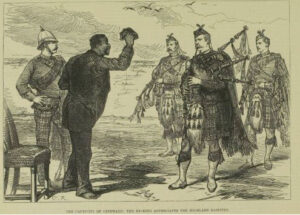 In 1878, the British High Commissioner to the Cape Colony, Sir Henry Bartle Frere, looked for an opportunity to confederate the colony. He felt that the barrier to this dream was the powerful Zulu state at its borders.

Henry Frere began to mandate reparations for conflicts that occurred at the border. He asked his subordinates to send messages finding fault with Cetwayo’s policies. His intention was to provoke the Zulu king. They did. Yet the Zulu king kept his peace. He considered the British his friends and he was conscious of the power wielded by the British Army.

He stated that he was equal to Frere and if he did not fault find his policies for administering Cape Colony, then Frere should do the same to him, as it concerned Zululand.

Frere then issued an ultimatum insisting the Cetshwayo de facto disperse his army. Cetshwayo refused and this led to war in 1879.

Although the Zulu king consistently sought peace, it seemed impossible.

After an initial battle at Isandlwana, the first engagement of the war, the Zulu won. However, the British had two follow-up victories at Rorke’s Drift and Kambula. This prevented a total collapse of the British military positions. The retreat was an opportunity for a Zulu counterattack deep into Natal.

Seeking a Peace Treaty With the British

Cetshwayo refused to mount such an attack. He intended to seek a peace treaty after repulsing the British offensive.

The British came back to Zululand with a stronger force and captured the Zulu capital at the Battle of Ulundi.

Having learned their lesson from their earlier defeat at Islandlwana, they set up a hollow square on the open plain, and then made use of cannons and Gatling guns for the offensive.

After 45 minutes of battle, the British ordered their cavalry to charge the Zulus. They routed them and Ulundi was taken and burned to the ground on July 4. Cetwayo was toppled and banished.

He went to Cape Town and then to London. He returned to Zululand in 1883.

From 1881, many people took up his cause including Lady Florence Dixie, who was a correspondent of The Morning Post. She wrote many articles and books to support him.

He gained public sympathy from his gentle dignified manner and the sentiments that Bartle Frere and Lord Chelmsford treated him inconsiderately. 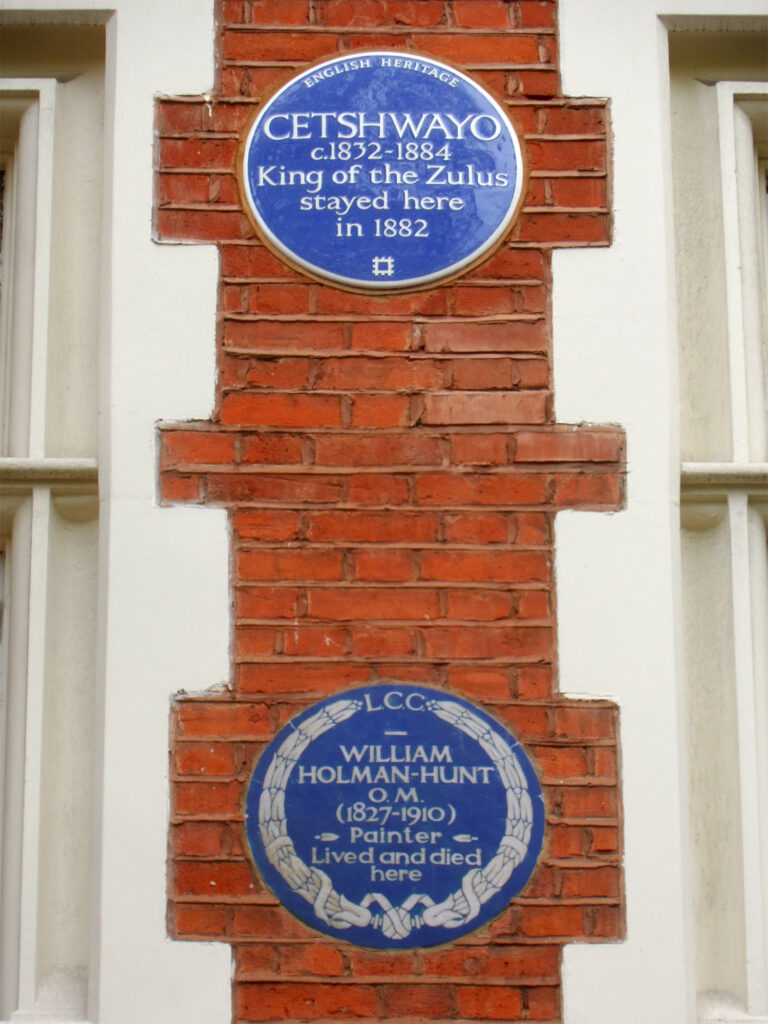 In 1882, two Zulu factors had irreconcilable differences. Some of them were pro-Cetshwayo Usuthus and three rival chiefs led by Zibhebhu-began a civil war. The British government attempted to reestablish Cetshwayo as king in some part of his territory and failed.

With the assistance of Boer mercenaries, Chief Zibhebhu began a war with the intention to contest the succession of Cetshwayo, and on 22 July 1883, he attack the Zulu king’s new kraal in Ulundi. The king was wounded but escaped to the Nkandla forest.

After many requests from the current Resident Commissioner, Sir Melmoth Osborne, the Zulu king moved to Eshowe. Here he died on the 8 February at age 60, a few months later. It was assumed that it was a heart attack.

There are many theories that he was poisoned. His body was buried in the forest to the south near Nkunzane River. The wagon that took his corpse to the gravesite was placed on the grave and can be seen at Ondini Museum, near Ulundi.

Cetshwayo was influential in the history of South Africa. He is the last king of the Zulu kingdom. His son, Dinuzulu was made king on 20 May 1884 and other Boer mercenaries supported him. In London, at Melbury Road, Kensington, you can find a blue plaque that commemorates Cetshwayo.

In 2016, he had a District Municipality named after him.

Also read The Captivating history of the African Country Rwanda; its Culture and People Part III