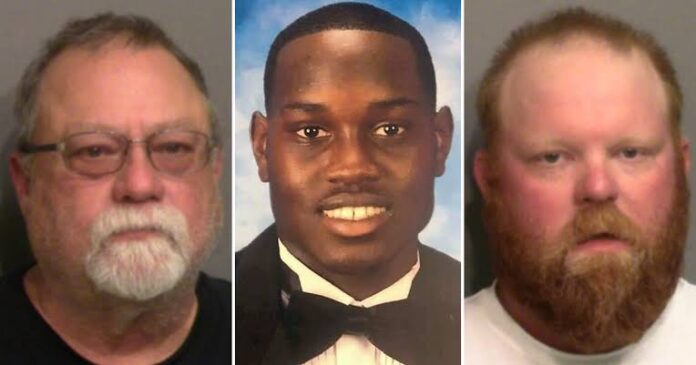 Two of the three white men who stalked and killed Ahmaud Arbery as he ran through a Georgia neighborhood in early 2020 were sentenced to life in prison on federal hate crime charges on Monday.

Travis McMichael, who was responsible for Arbery’s fatal shooting, and his father Greg McMichael had previously been sentenced to life in prison without parole during a state trial in Georgia for their role in the murder.

Later on Monday, William “Roddie” Bryan, the man who recorded the cellphone video of Arbery’s murder, was sentenced to 35 years in prison after his role in the deadly chase was ruled a federal hate crime.

A judge also requested that Travis McMichael, 36, Greg McMichael, 66, and William “Roddie” Bryan, 52, serve their sentences in state prison instead of federal prison as their lawyers had requested.

The McMichaels and Bryan, who are all white, were found guilty in February of federal hate crimes for killing Arbery, a black man who was running in their neighborhood when the defendants confronted him in February 2020.

The three men were found guilty of all federal charges, including hate crimes, attempted kidnapping and using a firearm to commit a felony.

Prosecutors asked for life in prison for the three men. However, Godbey Wood said he found it necessary to distinguish Bryan from the McMichaels, in part because, unlike his neighbors, he didn’t bring a gun with him when the men went after Arbery.

“It’s not lost on the court that two men brought guns into this situation that had its worst effect, and you weren’t one of them,” she said. However, she added that Bryan “still deserved a very long sentence”.

“When you serve your federal sentence, you will be nearly 90 years old. But again, Mr. Arbery never got the chance to turn 26,” she said. “I’ve found the penalty imposed is a very long and well-deserved rundown.”

Prosecutor Tara Lyons called the sentencing hearings “the end of at least one chapter in an unbearably painful journey for Ahmaud Arbery’s family, his community and an entire nation that mourned Ahmaud”.

Arbery’s family insisted that the McMichaels and Bryan should serve their sentences in a state prison, arguing that a federal prison wouldn’t be that harsh.

Also, read; Singer, Kizz Daniel, Arrested In Tanzania After Failing To Show Up For Paid Performance

His parents protested vigorously before the federal trial, when both McMichaels sought a plea deal that would include a request for transfer to a federal prison. The judge rejected the deal.

A federal judge does not have the authority to order the state to hand over legal custody of prisoners to the Federal Bureau of Prisons, said Ed Tarver, Augusta’s attorney and former US attorney for the Southern District of Georgia.

He said the judge can request that the state prison agency transfer the accused to a federal prison.

The McMichaels armed themselves with guns and jumped into a truck to chase Arbery after they saw him driving past their home on the outskirts of the port city of Braunschweig on February 23, 2020.

Bryan joined the chase in his truck and helped stop Arbery from escaping. He also captured cellphone video of Travis McMichael shooting Arbery at close range as Arbery threw punches and grabbed the shotgun.

The McMichaels told police they suspected Arbery had robbed a nearby house under construction. However, authorities later concluded that he was unarmed and had committed no crime. Arbery’s family has long insisted that he only jogged.

Still, more than two months passed before charges were filed for Arbery’s death. The McMichaels and Bryan were only arrested after graphic video of the shooting leaked online and the Georgia Bureau of Investigation took over the case from local police.

During the February hate crime trial, prosecutors beefed up their case that Arbery’s murder was racially motivated, showing the jury about two dozen text messages and social media posts in which Travis McMichael and Bryan used racial slurs and made derogatory remarks about blacks.

A woman testified upon listening to an angry rant by Greg McMichael in 2015, in which he said, “All these blacks are nothing but trouble.”

Defense attorneys for the three men argued that the McMichaels and Bryan were not victimizing Arbery because of his race, but because of a serious problem they suspected, albeit erroneously, that Arbery had committed crimes in their neighborhood.