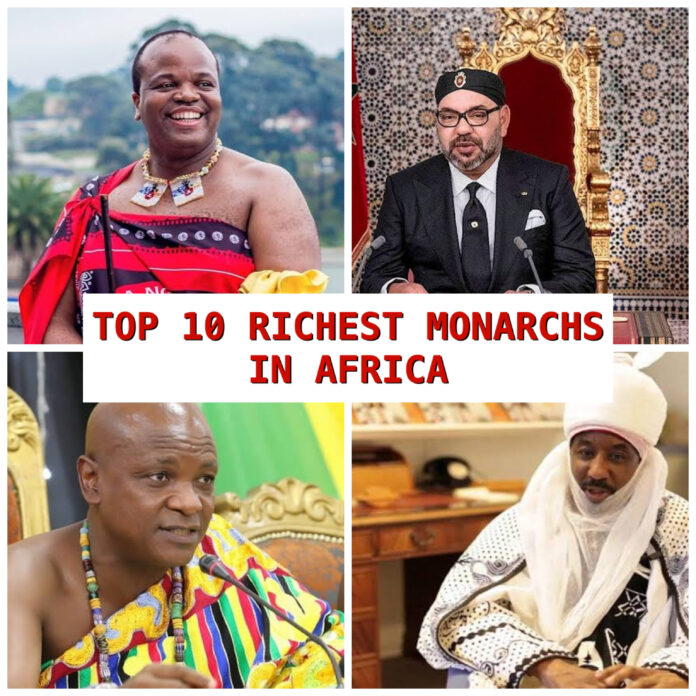 Large wealth is under the power of many African leaders both inside and outside of their communities.

In addition to their riches, some of them have influence, which leads to invitations to join the boards of major corporations.

Since it is uncommon for a poor king to exist, it is safe to assume that royalty and riches go hand in hand.

The most of the richest monarchs in Africa derived a large portion of their money through economic initiatives, charitable offerings to the community, inheritance, taxes, and other business endeavors.

His Majesty King Mohammed VI of Morocco ranks number one among the richest monarchs in Africa.

After taking the throne in July 1999 as the 27th monarch of the Alaouite dynasty, King Mohammed VI immediately began a series of socio-political and economic reforms that have made the Kingdom more liberated and prosperous than it was under his father, King Hassan II.

His ownership of Société Nationale d’Investissement (SNI), a significant Moroccan investment holding company with assets of more than $10 billion, is where he obtains his wealth.

Nigerian monarch Oba Fredrick Obateru Akinruntan is in charge of the Ugbo Kingdom according to custom.

The Ugbo Kingdom is located in the southwest Nigerian Ondo State’s Ilaje Local Government. He was elected in 2009.

Born in the 1950s, Oba Fredrick Obateru Akinruntan is the creator of Obat Oil, one of the biggest privately owned oil firms in Nigeria.

With an estimated net worth of $300 million, he is currently the second-wealthiest king in Africa and one of the wealthiest individuals in Nigeria. He also possesses a sizable portfolio of residential and commercial real estate assets in Nigeria and London.

On April 19, 1968, in Manzini, King Mswati III was born as Makhosetive. He became the world’s youngest monarch when he ascended the throne at the age of 18 as the 25th monarch to rule.

He has an estimated net worth of $100 million and is the last absolute king in Africa. But despite being the leader of Swaziland, he has come under heavy fire for leading a lavish lifestyle as the people of his country starve to death.

Muslims make up roughly half of the population of Nigeria, and he has served as their spiritual guide.

In the late 1980s, he oversaw the Armored Corps’ protection of General Babangida. With an estimated net worth of $100 million, he is among the wealthiest royals in the world and the second richest king in Nigeria.

Lamido Sanusi Lamido, the spiritual head of the Tijanniyah Sufi community in Nigeria, was born on July 31, 1961.

He was crowned on February 7, 2015, and is also known as Khalifa Sanusi II. He was raised in a royal family and eventually took over the throne from his uncle.

He was the governor of the Central Bank of Nigeria from 2009 to 2014, and he is a banker and economist. Over the years, he has accumulated an estimated net worth of $80 million.

Oba Adeyeye Ogunwusi Enitan, the 51st ruler of the Yoruba kingdom, was born on October 17, 1974.

After succeeding Oba Okunade Sijuwade, he took the throne in 2015. With an estimated net worth of $70 million, he is one of the wealthiest rulers in Nigeria.

With an estimated net worth of $60 million, he is one of the wealthiest rulers in Nigeria and the 40th Emperor of the Benin Empire.

He rose to prominence by taking on various ambassadorial duties and making numerous business interests.

Born on May 14, 1941, Nnaemka Alfred has become one of Eastern Nigeria’s most well-known rulers.

He now serves as the Chancellor of Ahmadu Bello University and the Chairman of Unilever Nigeria’s Board of Directors.

He is now the trustee of the National Traditional Rulers Council and has a net worth of $50 million. The UK, Sierra Leone, the Netherlands, Liberia, Nigeria, Ghana, and the Gambia were just a few of the countries where he had served as the director of Shell enterprises.

Lagos State, Nigeria, is the location of Oba Rilwan Akiolu’s birth on October 29, 1943. The 21st Oba of Lagos State, he is well-known as the traditional head of Nigeria.

His last position in the Nigerian Police Force was assistant inspector general. A $40 million figure represents his current net worth.

He attended Ansar-Ud-Deen College in Surulele, Lagos, where he earned his SSCE diploma in 1965. He then went on to the University of Lagos to pursue a legal education.

The President of Asogli Traditional Area and a former head of the National House of Chiefs, Togbe Afede XIV was born on April 23, 1957.

Currently the executive chairman of the World Trade Centre Accra, he has a $30 million net worth. Strategic African Securities Ltd., which he formed, is comprised of the SAS Finance Group Ltd.

Additionally, he established Strategic Initiatives Ltd., a portfolio and private equity investing company. He is also a pilot and serves as the co-pilot of an Africa World Airlines Embraer 145, which he took to the skies for the first time in April 2021 at Ho Airport.

Share
Facebook
Twitter
Pinterest
WhatsApp
Previous article
Father and Son Sentenced To Life In Prison For The Murder of Ahmaud Arbery
Next article
U.S. Intensifies Calls For Democracy In Africa, as Russia, China, Expands Influence On The Continent