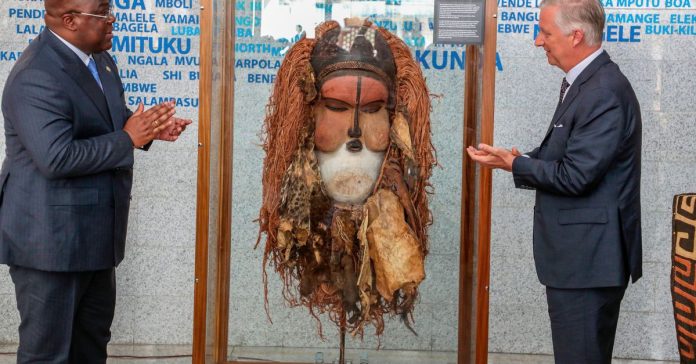 On Wednesday, Belgium’s Monarch Philippe repeated his profound regrets for the exploitation, bigotry, and acts of brutality committed during his country’s colonization of the Democratic Republic of Congo.

The Monarch also returned an important relic in further expression of his deepest regrets to the Congolese people. However, no statement of apology was detected in his speech.

The president of the Democratic Republic of Congo received a giant wooden mask from Belgium’s king on Wednesday, one of thousands of artifacts brought to the European country from its former colony.

On his first visit to the country since taking the throne in 2013, King Philippe noted that presenting the mask to Congolese President Felix Tshisekedi was a significant symbolic gesture.

Philippe became the first Belgian official to express regret for colonization two years ago, and some Congolese thought he would do so during his first visit to the country since assuming the throne in 2013.

However, It was not nearly enough, as seen from Congolese users who reacted on social media. They demanded an apology for the infamous crimes done against their forefathers to enrich the king’s forefather, Leopold II, who claimed the land as his personal fiefdom in 1885 and plundering it for over two decades.

Interestingly, Phillipe came prepared, as he not only brought a relic in an attempt to restore a great relationship with Congo, he also repeated his earlier statement, where he had expressed regrets in a detailed speech.

“Even though many Belgians invested themselves sincerely, loving Congo and its people deeply, the colonial regime itself was based on exploitation and domination,” Phillipe told a joint session of parliament in the capital Kinshasa.

“On the occasion of my first trip to Congo, right here, in front of the Congolese people and those who still suffer today, I wish to reaffirm my deepest regrets for those wounds of the past,” Phillipe added.

Philippe’s visit has been warmly welcomed by Congo President Felix Tshisekedi and numerous politicians. Belgian flags were flown by numerous supporters of the ruling party, while a banner hanging from parliament read: “A common history.”
Others, on the other hand, were dissatisfied by the lack of an apology.

Dark History Of The Colonial Rule

According to records, during the first 23 years of Belgium’s monarchy, from 1885 to 1960, when King Leopold II ruled the Congo Free State as a personal domain, up to 10 million Congolese died as a result of killings, famine, and illness.

Villages that failed to meet their rubber collection goals were notoriously forced to offer severed hands in their place.

“I applaud the King of Belgium’s remarks. Regrets, on the other hand, are insufficient in the face of Belgium’s crimes, “Senator Francine Muyumba Nkanga of the Congolese opposition explained on Twitter.

“From him, we expect an apology and a pledge of restitution. That is the cost of finally turning the page, “she added.

Belgium has always kept a low profile when it comes to colonialism, and the issue is rarely addressed in Belgian schools. However, there appears to be a turn around, with dozens of people paying attention to historical wrongdoings by Belgium in DR. Congo during its colonial rule.