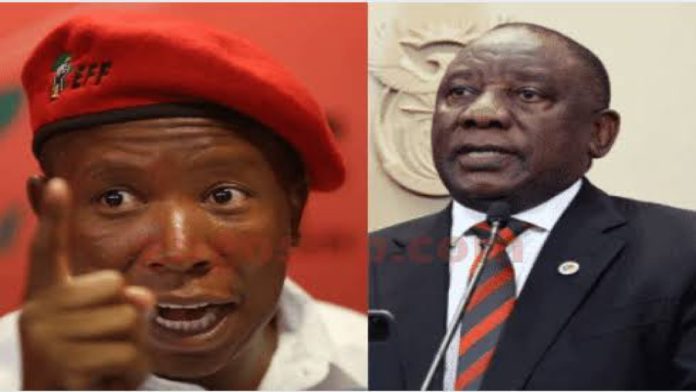 Following claims that money was stolen from his Phala Phala property, South African President Cyril Ramaphosa has been asked by Julius Malema to immediately step down.

The leader of the Radical Economic Freedom Fighters, Malema claimed in a press conference on Tuesday, that Ramaphosa had failed to convince South Africans that he is a worthy president.

“Fellow South Africans, we gave Cyril Ramaphosa a chance to prove himself, he has dismally failed. We will treat him the same way we have treated Zuma,” Malema said. He further added that the President must leave office with “immediate effect” because he has refused to respect his “oath of office,” Malema said in his now controversial statement.

Meanwhile, the ruling African National Congress (ANC) said in a statement that it “welcomed and congratulated the president’s decision to voluntarily present himself to the ANC Integrity Commission,” but did not name a date.

President Cyril Ramaphosa, who is embroiled in a burglary issue, will testify before the party’s Integrity Commission.

Sadly for the ANC, it has been plagued by political infighting, and has since been attempting to reform itself by combating corruption, with members facing criminal charges being systematically suspended. This seems to be against Ramaphosa, if the allegations against him are convincing enough to the Party.

In the coming months, the party is likely to announce its candidate for the 2024 national election, which seemingly would be affected by the unfortunate allegations against the incumbent president.

According to Malema, “Game farm parties owned by Cyril Ramaphosa are exploited for illicit financial flows, including money laundering.” The activist further stated that “It’s unsurprising that 60 million dollars in bills were stolen from Cyril Ramaphosa’s property and not reported to the South African police.”

He claimed that the failure to report the incident to the South African police could be due to the moral standing of Ramaphosa himself. “criminals do not report crimes when their proceeds of crime are stolen,” Malema said.

Recall that earlier reports stated that Arthur Fraser, former South African intelligence chief, had reported a complaint on Wednesday at a Johannesburg police station stating that the case began in February 2020.

Ramaphosa has denied the figure, although he has admitted to buying and selling animals “sometimes with cash, sometimes with transfers.”

As it stands, Ramaphosa is accused of concealing the theft from police and tax authorities in the case. With claims that the president “paid” the thieves “for their silence” after that.