Despite His 36-Year Reign, Museveni Blames Past Regime For Uganda’s Economic Issues 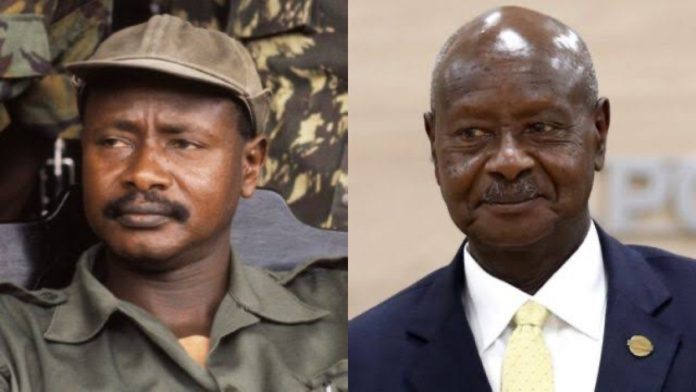 President Yoweri Museveni of Uganda has blamed past leaders of the country for the economic crisis it now suffers.

Despite having spent 36 years as president of Uganda, Museveni claims that the past leaders should be held accountable for the issues the country now faces, as the “colonialists poisoned the minds of hardworking farmers.”

“When the colonialists came here, they made our people grow the crops they wanted: cotton, tobacco, coffee, tea, and then our leaders just copied what the colonialists told them… So, when I studied the issue, I could see danger, number one was only working for the stomach,” Museveni said.

While speaking to a media house in Uganda, Museveni claimed that the local workers had been genuinely interested in working their farms.

He noted that the past leaders then came into the picture and changed their minds, putting them against local farming and unto another economic sector that has proven quite ineffective.

The Ugandan President further added that the locals must get back on track in terms of working hard, to feed their “stomach.” Rather than working for their pockets (money), the President believes they should work to feed their stomachs directly.

“That is how you get West Nile growing tobacco. If you grow tobacco on one acre, you will never get out of poverty…” he said.

Interestingly, Museveni has been president of Uganda since 1986 (36 years), which has since begged the question among Ugandans about how long it takes to “fix the mistakes of past leaders.”

Read also; Californian Woman Regains Consciousness In Nigeria, Claims She Was Hypnotized By A Fraudster

The president made several controversial remarks while addressing the country’s unstable economy and its battle with poverty.

While speaking with leaders from the Acholi and Lango sub-regions at Baralegi State Lodge in the Otuke District of the country, on Saturday, Museveni advised citizens below the poverty line to find a venture that would prove useful in providing them with food.

He claimed that such lucrative enterprises include the farming of coffee, fruits, dairy, poultry, and fish farming. “You should select enterprises which have a big demand within Uganda, Africa, and internationally,” Mr. Museveni said.

In the same breath, he advised already known farmers about Vanilla, stating that it earlier had a good market but one that has now been affected by collapsing price.

Recall that Uganda’s Ministry of Finance claimed that 28% of Ugandans were poor in the first half of 2021. According to World Bank guidelines, the official poverty level is $1.90 buying power per day and per head.

The Finance Ministry also stated that the Covid-19 problem has cost two-thirds of Ugandans a considerable amount of money.

While meeting with the President on Saturday, the Acholi Parliamentary Group reiterated this sentiment, adding that issues of economic crisis have grown to a recognizable state.

According to Uganda’s government, the number of individuals living below the poverty line could rise by 2.6 million people, based on the national poverty level (source: Development Initiatives).