Californian Woman Regains Consciousness In Nigeria, Claims She Was Hypnotized By A Fraudster 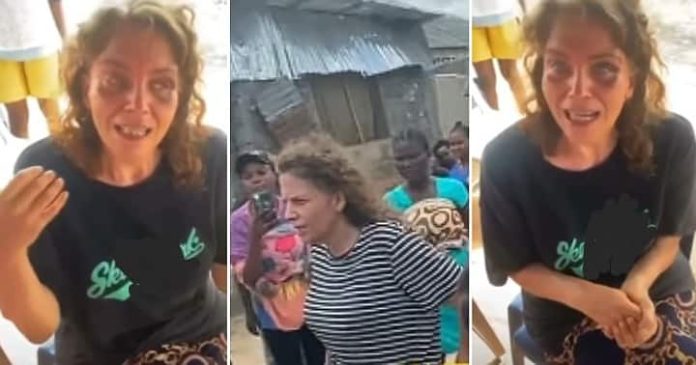 According to witnesses, a White woman from California, United States of America, suddenly regained consciousness and realized she had been allegedly hypnotized by a young man in Nigeria.

The woman apparently regained consciousness in Epo Badagry, Lagos state, where she claimed she had no idea how she got into the country. Sources claimed that they found the woman roaming the streets, confused and in despair, when they rushed to help.

Upon reaching her, she shared her story, describing to them that she was innocently in California when she began a conversation with a supposed fraudster in Nigeria. After several weeks, witnesses claim that she was convinced by the young man to come to Nigeria and spend her wealth.

Unfortunately, on reaching the country, she supposedly got robbed of her wealth and was soon left to wander under the influence of “black magic.”

While dozens have spoken against the story, with many criticizing the probability that it happened, others have come out to seek intervention on the growing number of internet fraudsters also known as “Yahoo boys” in Nigeria. In the same breath, some Nigerians have applauded the effectiveness of local practice of “black magic.”

There has been an increase in cases of White woman flying down to Nigeria for love. Over the past few months, numerous women from Europe and America have made their way into the country to pursue a love affair with a Nigerian man.

While some of these have gone very well, with testimonies shared online, others have simply been noted to be an absolute disaster.

Unfortunately, just as many invite these women for love, others do so in hopes of defrauding them. These young men pose as innocent Nigerians seeking love, only to defraud these women and leave them stranded.

Recently, cyber fraud, often known as Yahoo Yahoo in Nigeria, has taken on a variety of forms.

In Nigeria, cybercriminals known as (Yahoo boys) continue to operate and improve their scams using technological tools such as VPN applications to conceal their location, photo manipulation software to create false appearances. They also use bitcoin anonymity to receive fraudulent proceeds, and creating phishing web pages, among other things.

For a long time, there hasn’t been a week that the Economic and Financial Crimes Commission (EFC C) hasn’t arrested young men for cyber fraud, or that courts haven’t sentenced some of them to prison for computer fraud-related offenses.