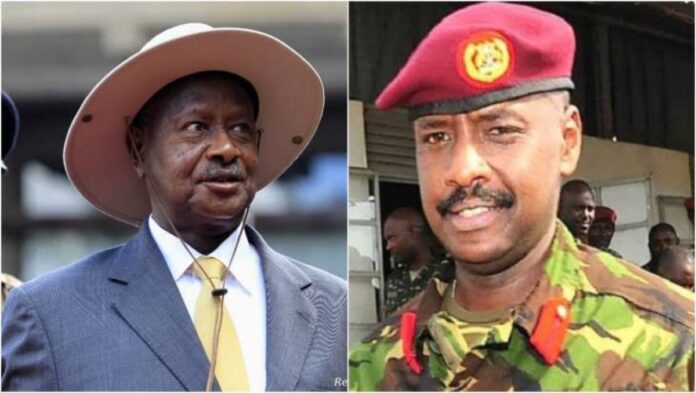 Ugandan General Muhoozi Kainerugaba, son of President Yoweri Museveni, shook up the military and ruling party structures with a declaration of his ambitions as president.

General Muhoozi, who was recently relieved of his duties as commander of ground forces, announced that he wants to become President of Uganda to honor his mother.

“The only way to repay my amazing mother is to be President of Uganda! And I definitely will!!” he wrote on his Twitter page on Thursday.

Gen Muhoozi praised his mother, the First Lady and Ugandan Minister of Education and Sports Janet Museveni, describing her as an angel. “My mother has always been an angel to me. She is just perfect! How most men feel about their mothers!!!” he tweeted on Friday morning.

The four-star general later announced a youth convention in the coming weeks, which he said had been approved by the president.

He recently presided over a sporting event in Arua, northwest Uganda, where he assured young people that he would meet with them more often because of the bigger plan.

These latest comments, which indicate his desire for Uganda’s top spot, have caused unrest both in the ruling National Resistance Movement, which his father leads, and in the army.

Muhoozi and his supporters spoke about the general’s contribution to the country, his political skills and why he deserves the country’s top spot.

However, Gen Muhoozi must overcome two obstacles if he wants to participate in the elections. First you have to be accepted into the NRM. Some NRM mobilizers are uncomfortable with his 2026 speech, insisting he serves the country better in the army.

Another group calling itself the Transformer Cadres Association Uganda (TCAU) has asked President Museveni to retire General Muhoozi so he can fully participate in politics. They are also pushing for a constitutional amendment to abolish universal adult suffrage and give Parliament the power to elect the president.

Ibrahim Kitatta, an NRM mobilizer, says General Muhoozi’s declaration for the 2026 elections and the NRM’s silence forced them to come out and “lead the country to avoid confusion for years to come”.

“We support President Museveni as our permanent power source, but we also support Muhoozi as a backup generator, waiting to be turned on if the main power source fails or fails.”

However, any talk of President Museveni’s resignation seems like an illusion. With the removal of term and age limits, President Museveni can legally challenge the presidency at any time if there are elections.

Kitatta says the party’s general secretary said General Muhoozi is still a member of the army and they won’t be able to discuss his ambitions as president until he retires from the army.

Uganda’s Constitution requires UPDF members to be non-partisan and subordinate to civil authority. So Gen Muhoozi is already breaking the law, although the UPDF has kept silent about it.

In May 2022, the Constitutional Court ordered General Muhoozi to respond to a petition that accused him of expressing his ambitions as president despite still being an army officer, in a petition filed by a Kampala lawyer, Gawaya Tegulle.

“As a serving officer of the UPDF, General Muhoozi acted without discipline, without good character if he went unpunished and in violation of the Defense Forces Code of Conduct,” the petitioner explained, adding that the court must declare his actions unconstitutional.