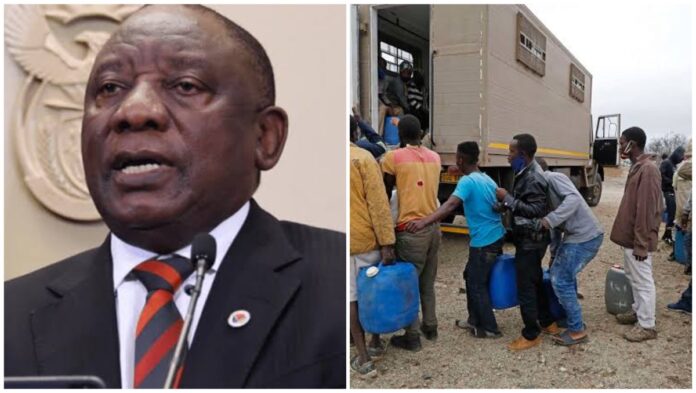 South African President Cyril Ramaphosa said the wave of economic migrants from Zimbabwe is becoming a burden on South Africa and called for an end to Western sanctions on the country.

President Ramaphosa made the remarks in response to a question about immigration challenges during a joint press conference with Spanish Prime Minister Pedro Neto.

“The only issue that we have repeatedly raised and that represents another dynamic of this situation (of immigration) is the sanctions that have been imposed, particularly on our continent,” he said.

“The sanctions against Zimbabwe, for example, have had a negative impact not only on the Zimbabwean economy but also on many countries in the Southern African Development Community (SADC).

“It also has a negative impact on us (South Africa) because as the sanctions weaken the Zimbabwean economy, Zimbabweans are forced to emigrate and come to our country and other countries in the sub-region.

“They enter Botswana, South Africa, Namibia and put enormous pressure on us.”

Also, read; Ethiopia Inaugurates Museum of Art and Science, One of The Largest In Africa

“So what we are saying is that these sanctions should be lifted and we should be able to boost the economies of these countries so that people have less incentive to leave their countries to go to other countries because their economies are at a halt,” he said.

Ramaphosa added; “Once again we call on the various countries that have imposed sanctions on African countries, particularly Zimbabwe, to lift those sanctions so that country’s economy can get back on its feet and go back to what it was before.”

In this way, there will be a great incentive for Zimbabweans who have left Zimbabwe to return to their normal life in their country.

DRC President Felix Tshisekedi, who is also the chairman of the SADC group, issued a statement this week calling for the lifting of sanctions on Zimbabwe.

South Africa announced earlier this year that it would end a special permit system designed to legalize the stay of nearly 200,000 Zimbabwean economic migrants in the country.

The number of these Zimbabwean refugees in South Africa is unknown due to a lack of documentation, but some estimates put the number at more than three million.

Zimbabwe blames a nearly two-decade-old embargo for collapsing its economy, but the United States and Britain said this week that the country’s problems are linked to years of corruption, bad policing and mismanagement, not sanctions.

In addition to the United States and the United Kingdom, the European Union, Australia, Canada, and New Zealand have their sanctions against Zimbabwe.