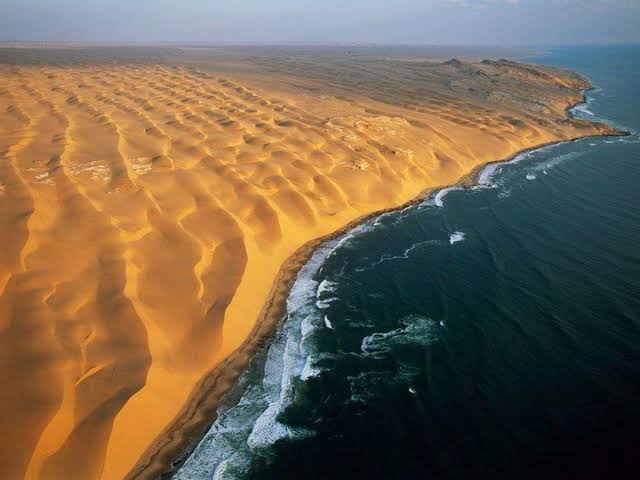 Namibia, a beautiful country in southwest Africa, is distinguished by the Namib Desert along its Atlantic Ocean coast. The country is home to diverse wildlife, including a substantial cheetah population. The capital, Windhoek, and coastal town Swakopmund contain German colonial-era buildings such as Windhoek’s Christuskirche, built-in 1907. In the north, Etosha National Park’s salt pan draws games including rhinos and giraffes.

Culture in Namibia is a blend of many different people and its culture and customs have absorbed both African and European elements and fused them into a blend of the two living peacefully together.

Namibia being one of the sparsest populated countries in the worl, its different cultures span an impressively diverse population, from the Bantu-speaking Ovambo and Herero tribes, which are admired for their colorful Victorian dress to the Damara minorities and nomadic San Bushmen. German colonization left its own imprint on this Southern African nation with German being a widely spoken language today and German architecture and cuisine featuring prominently. Namibia’s diverse and, at times, harsh climate contributed to its colorful history while skirmishes, international and national, reflected in much of its modern history.

Ovambo people  are the single largest ethnic group in Namibia, accounting for about half of the population and one of Namibia’s most vibrant tribes. They have retained many aspects of their cultural practices, despite concerted efforts from Christian missionaries to wipe out what was believed to be ‘pagan practices.

The Herero  are a Bantu ethnic group inhabiting parts of Southern Africa. There were an estimated 250,000 Herero people in Namibia in 2013. They speak Otjiherero, a Bantu language. Though the Herero primarily reside in Namibia, there are also significant populations in Botswana and Angola. The Herero are known as bold culture keepers. The big ball gown dress and the head gear are the main wear for women while men are mostly seen with leather hats and walking sticks. 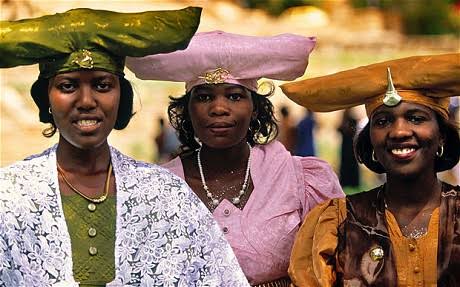 The arid Namib Land Reserve or the Kalahari Savanna change to a long coastline with beautiful beaches or the green and lush area of the Caprivi Strip. Namibia’s Rock formations like the Spitzkoppe or Waterberg Plateau, the second largest canyon on the World, the Fish River Canyon or the Etosha National Park are only one of a few reserves that have to be visited while staying in this beautiful and scenic country.

Must See Places in Namibia.

This paradise of tourism is a must visit for everyone around the globe that has intrest in tourism and have an affection for wildlife. With a scenery that will leave you spellbound, but unfornuately time might not be on your side, so here is a list to keep you covered and making sure you experience tourism at its peak.

Wildlife which gather around the waterholes in the dry season; the transformation of the salt pan after the rains with incredible landscapes. 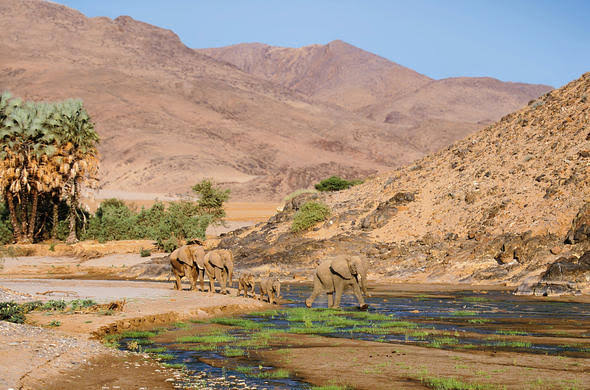 Covering more than 22 000 square km, this magnificent Park is quite a wonder, and while it attracts thousands of visitors every year it never feels crowded. It is a major wildlife sanctuary and place of great fascination. The main features are the 30 odd waterholes and springs in the southern area, and the vast salt pan which dazzles the eye with its whiteness  both features attract just about every type of animal in Africa.

Animals like the Giraffe, Zebra, Elephant and Springbokc number in the thousands. In this amazing wildlife park you can also find other animals like Lion, Leopard, Hyena, the endangered Rhino, Black-Faced Impala (endemic) and Cheetah are all present. 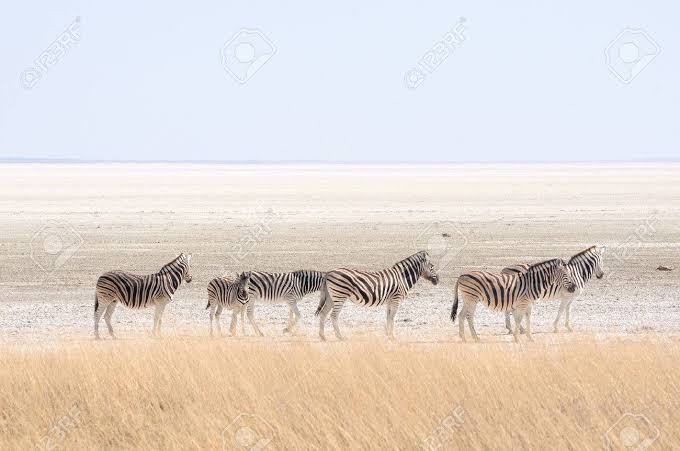 The blessed park also has a prolific birdlife. Birlds like the Flamingos and Pelicans are found here, especially  after it rains. Apart from the park having 4 great camps, accommodation can also be found in neighboring town of Outjo and Tsumeb. 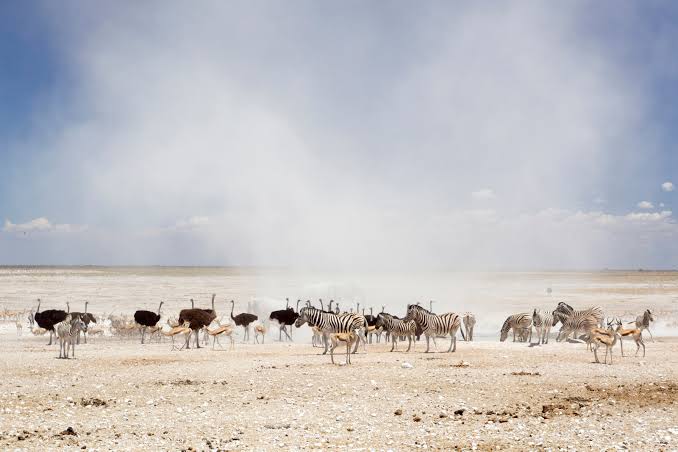 This beautiful area runs inland along the Skeleton Coast north of Swakopmund and south of Etosha Park. The main town in this area is the Khorixas.

Wildlife here have adapted to the intense climate and terrain to survive. Animals like the Black Rhino, Desert Elephant, Lion, Desert dwelling Giraffe, mountain Zebra, Gemsbok, and Springbok are found in this delightful area.

Damaraland has many side attractions like Attractions: Spitzkoppe and Brandberg Massif; Bushmen rock engravings at Twyfelfontein; weird rock formations called the Organ Pipes, and the ancient Petrified Forest which is millions of years old; Erongo Mountain caves. 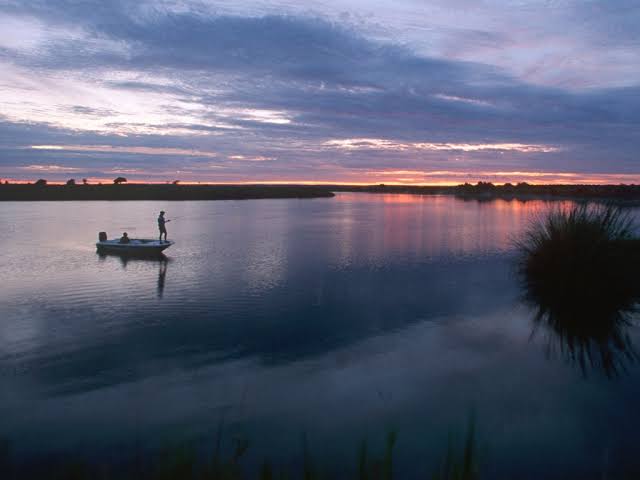 The Caprivi Strip forms a narrow finger along the far north-eastern edge of the country and covers about 450km (280 miles); it borders Zambia and Angola to the north, Botswana on the south, Zimbabwe.

This elegant area is fed by permanent rivers, the Okavango, Kwando, Chobe, Linyati and Zambezi and receives a high rainfall making it the wettest region in Namibia.

There are no fences however, so animals like the Hyena, Hippo or Antelope species can roam about  freely across the borders of the neighboring countries.

It is also a tropical wonderland and perfect for boating, canoeing and kayaking.

Katima Mulilo has many amenities like an airport and great art and craft including basketry can be purchased here. 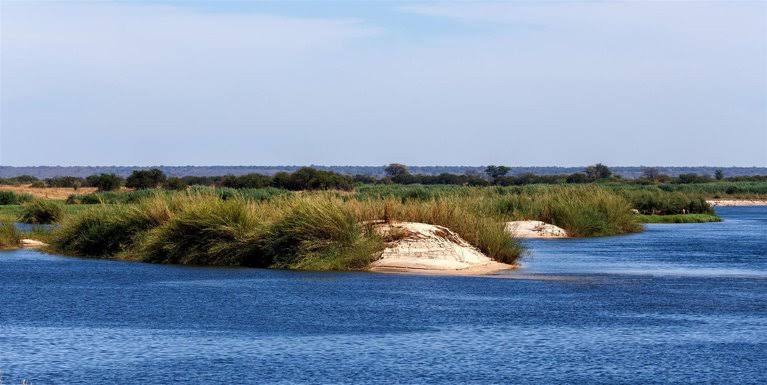 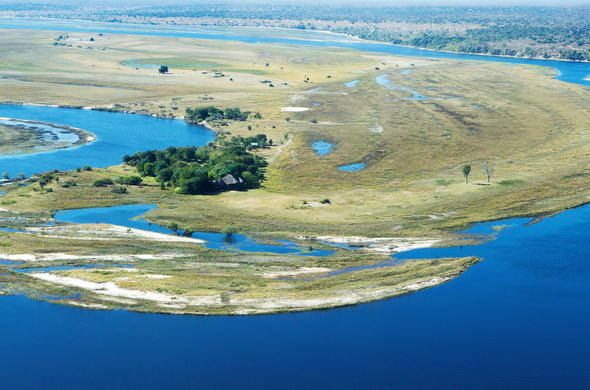 Swakopmund is Namibia’s biggest coastal town and a popular beach resort for people on holiday. it is the second largest city in the country.

The city’s German origins are quite pronounced in beautiful old German Colonial buildings,  throughout the city making a stark contrast with the Namib Desert at the edge of town.

With an attractive seaside destination, it has a great variety of outdoor activities like Sandboarding, Skydiving, Quad biking and Dolphin Cruise. Nightlife is also cool here.

It is an excellent base for exploring with fantastic drives going north to the Skeleton coast, Spitzkoppe and Etoshaand south to Walvis Bay and the Namib Naukluft Park. Walvis Bay has a beautiful lagoon, quite exceptional for viewing Flamingos, Pelicans, sea birds and migratory species in their thousands. 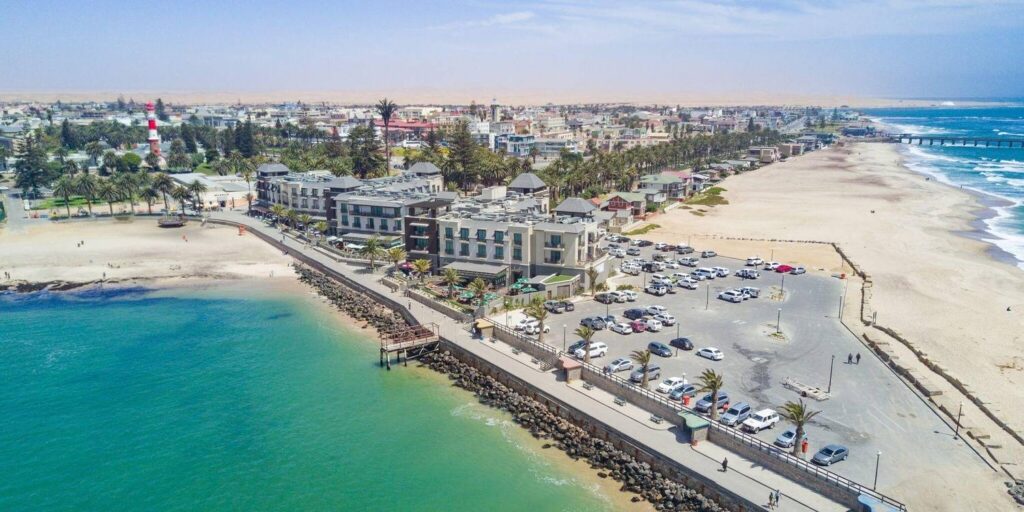 The Namib Desert And Atlantic Coast

This desert that meets the sea, stretching along the Atlantic coastline for 1 200km (746 miles) the desert encompasses the Skeleton Coast in the north, Swakopmund and Walvis Bay in the middle and Namib Naukluft Park in the south. This incredible desert of Namibia is ancient and really the most extreme on earth

The Atlantic waters are cold due to the Benguela current; the coastline is for the most part, treacherous. The worlds largest ship graveyard can be fully appreciated from the air along the Skeleton Coast; even whale bones can be seen.

Dense sea fogs and roaring storms characterise this coastline. The Namib Naukluft Park is rugged with vividly coloured giant dunes, mountains and gravel plains where only the most adaptable animals and plants can survive they are unique and highly innovative, surprisingly a great diversity of life can be found in all the different habitats here.

Ballooning over the Park is an extraordinary life-changing experience. In contrast, Swakopmund and Walvis Bay in the middle section are very popular holiday havens, providing cooler climes compared to Namibias interior. 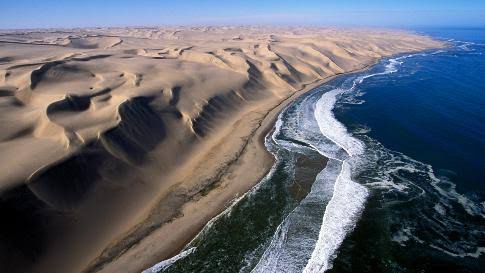 Namibia is a very beautiful country with a lot of tourist attraction site, a must visit for everyone around the world that has a thing for tourism, narrowing this list was a herculean task but then you should see for yourself. The beautiful scenery of Namibia can Be seen on their Instagram Handle.