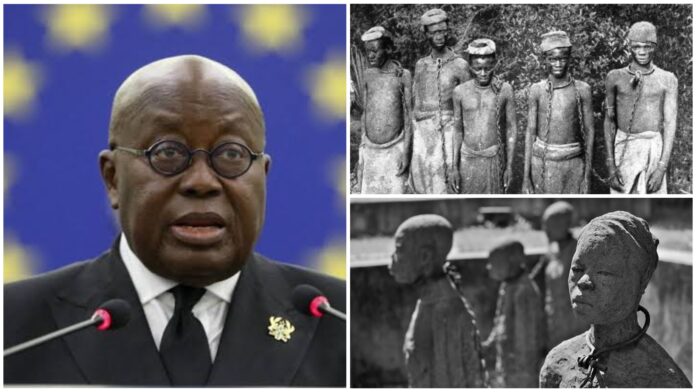 The President of Ghana, Nana Addo Dankwa Akufo-Addo has stated that it is time for Africans to receive reparations for slavery.

He noted that the impact of the slave trade was devastating for the African continent and the African diaspora, as the entire period of slavery suffocated Africa’s economic, cultural and psychological progress.

Speaking at the Summit on Reparations and Racial Healing on Monday, 1 August 2022, President Akufo-Addo emphasized that reparations for Africa and the African diaspora are long overdue.

However, he lamented that the issue of reparations “only becomes an issue” when it comes to Africa and Africans.

Similarly, in the United States, slave owners received three hundred dollars for each slave they owned; the slaves themselves received nothing.

In the case of Haiti, the country had to pay twenty-one billion dollars ($21 billion) in damages to French slaveholders in 1825 for the victory of the great Haitian revolution, the first in the Americas and the Caribbean that the US freed slaves.

The Ghanaian President mentioned the relationship between the issues that plague Africa and that of other nations.

He however claimed that other affected areas have received and continue to receive reparations, the Japanese-American families detained in American internment camps during World War II received reparations and native Americans included.

The Jewish people, six million of whom perished in the concentration camps of Hitler’s Germany, received reparations, including donations and assistance.

He continued: “So it’s time that Africa, whose freedoms were restricted by 20 million sons and daughters and sold into slavery, also received reparations.”

Affirming that no amount of money can undo the damage caused by the transatlantic slave trade and its consequences, which spanned many centuries, the President declared that “Nevertheless, it is time to revive and intensify discussions on reparations for the Africa. In fact, time is very late.”