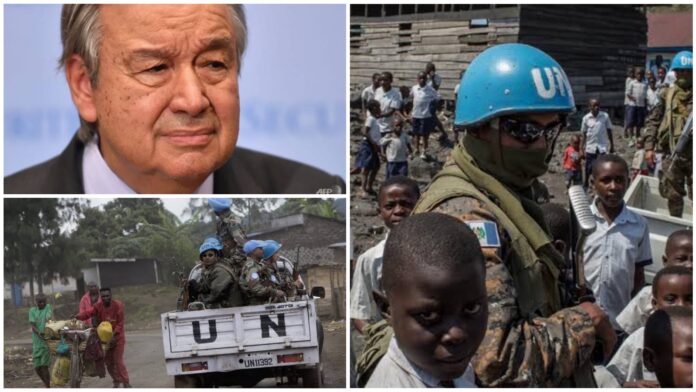 The UN Force, MUNOSCO, has expressed shock and outrage at the unfortunate deaths of two people, and the severe injury of others after its personnel opened fire during an incident in the eastern Democratic Republic of Congo on the Uganda border on Sunday.

MONUSCO admitted that some of its peacekeepers opened fire “for reasons unknown”, adding that arrests had already been made.
Guterres was “saddened and dismayed” to learn of the shooting, a UN statement said.

According to a statement by Guterres, the secretary-general had stressed the need for effective measures towards accountability for the events.

He mentioned that the secretary-general welcomes the decision to detain MONUSCO personnel involved in the incident and to immediately open an investigation, as suggested by his special representative in the Democratic Republic of the Congo.

Several video clips of the shooting have been shared on social media and as seen on said videos, at least one man in police uniform and another in army uniform could be seen moving towards the immobilized UN convoy behind a closed barrier in Kasindi, a town is in eastern DR Congo’s Beni territory on the border with Uganda.

After a verbal exchange, the peacekeepers appeared to open fire before opening the barrier and passing through as people dispersed or hid.

The MONUSCO force intervention brigade opened fire at the border checkpoint and forcibly pushed the passage during this event, according to a statement released on Sunday by the UN mission in Kasindi.

The statement further mentioned that the terrible occurrence resulted in fatalities and severe injury to people.

In a statement, government spokesperson Patrick Muyaya said that the DRC “condemns and deeply regrets this terrible occurrence in which two compatriots were killed, and 15 others were injured, according to a preliminary list.”

The government said it opened an investigation with MONUSCO to determine who was responsible for the motive for the shooting and to ensure that “heavy penalties” were imposed.

The UN envoy to the DRC, Bintou Keita, said she was “deeply shocked and dismayed by this serious incident”, the mission statement said.

MONUSCO explained that the shooters have been identified and detained pending the conclusion of the inquiry, which has already started in collaboration with the Congolese authorities, MONUSCO said.

The UN mission said the troops’ countries of origin were contacted to take immediate legal action, involving witnesses and survivors, which could result in exemplary sentences.