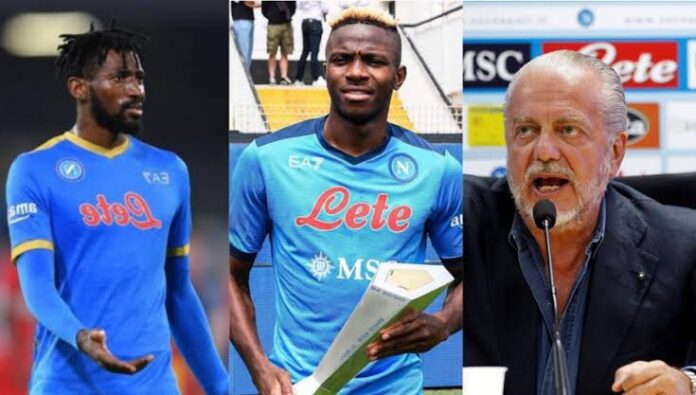 Napoli owner and president, Aurelio de Laurentiis has promised the club will not sign any more African players unless they signs a waiver confirming they will not participate in the African Cup of Nations.

Koulibaly and Anguissa missed six games for the Serie A club as they represented their nations in the tournament, which took place in January and February of last season. Algerian duo Adam Ounas and Karim Zedadka are also part of the Napoli squad, as is Nigerian striker Victor Osimhen

Napoli president De Laurentiis told Wall Street Italia this week: “No more African players, or they should give up playing in the African Cup of Nations. For this reason, I won’t buy them again.

The President noted that the team executives pay the African players, only for them to leave in the middle of the championship. He claimed that they sometimes sign a waiver that they will be unable to make it to the AFCON and championships.

Koulibaly spent eight years at Napoli and became a club icon before joining Chelsea this summer, responding to De Laurentiis’ comments on Wednesday: “You can’t talk about African teams like that being Senegal’s captain is not a good way to put it.

“If he thinks the team can play without African players, that’s up to him. But I don’t think everyone at the club has the same idea as him because I know their fans and they don’t think that way.”

On his Instagram page earlier this year, former Arsenal player Ian Wright posed the query: “Is there a competition as disregarded as the African Cup of Nations?”

The legendary former striker also criticized media coverage of the competition: “There is no greater honor than representing your country. The coverage is entirely racial.”

“Players participate in Euros in ten countries in the middle of a pandemic and there is no problem, but Cameroon, the only country that hosts a tournament, is a problem.”

The President explained that Some athletes receive a special question asking them if they would like to answer the call to represent their countries. Imagine yourself as a player for the Three Lions, representing England. Can you picture the feeling.