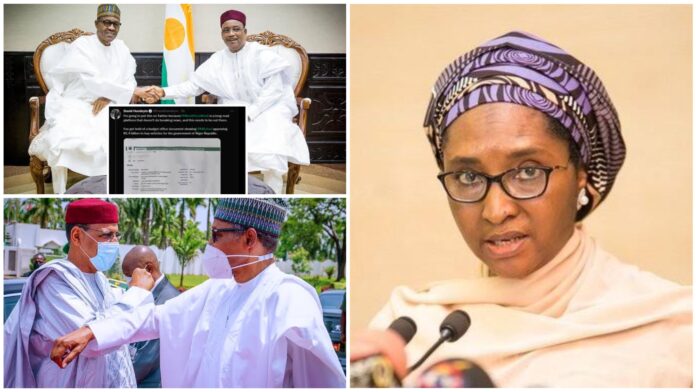 The Nigerian government has justified on Wednesday, the approval of the amount of $3.4M for the purchase of vehicles for the Republic of Niger.

Recall that there had been outrage at the generosity of the government towards the neighboring country, as some questioned why such money should be given to the Republic of Niger when public universities in Nigeria remained closed for about five months because the government failed to meet the demands of officials.

The outrage was sparked by the measure, which was exposed by a popular journalist and social media influencer, David Hundeyin.

However, Minister of Finance, Budget and National Planning Zainab Ahmed, when asked to confirm the reports, argued that while Nigerians have the right to challenge the approval, President Muhammadu Buhari, who approved the purchase, also has the right to do so based on its own assessment of the situations and will act accordingly.

In response to questions at the end of the weekly meeting of the Federal Executive Council, FEC, chaired by President Buhari in the Council Chambers, Presidential Villa, Abuja, the minister said that Nigeria has a policy of supporting its neighbors to improve its ability to deal with increasing insecurity.

She said Nigeria has supported its neighbors over time, adding that the donation was intended to improve the Republic of Niger’s ability to maintain security.

She said the president has the freedom to access what is in the best interest of the country.

While stating that the president reserves the right to make decisions in Nigeria’s interest, she said: “This is not the first time the country has demonstrated such interventions to its neighbors.

“Let me just say that Nigeria has had to support its neighbors, particularly its immediate neighbors, to improve its ability to protect its countries from us. This is not the first time Nigeria has helped the Republic of Niger, Cameroon or Chad.

“The president is evaluating what is needed based on the request of his presidents. Such requests are approved and interventions are provided.

“It’s supposed to improve their ability to protect their countries in terms of security and also Nigeria.”

She added: “Nigerians have the right to ask questions, but the president also has a responsibility to assess what is in the country’s best interest and I cannot question the decision.

“I said this is not the first time and that Nigeria as a country has intervened against our neighbors. It is in Nigeria’s best interest to do so.”

The President reportedly authorized about 10 Toyota Land Cruiser vehicles for the Republic of Niger, but did not specify the purpose of this authorization.

The document released by the influencer media revealed that the president approved the release of the fund on February 22 this year.

The order for the supply of 10 Toyoya Land Cruiser units was awarded to IFO Kaura Motors Nig. Limited.