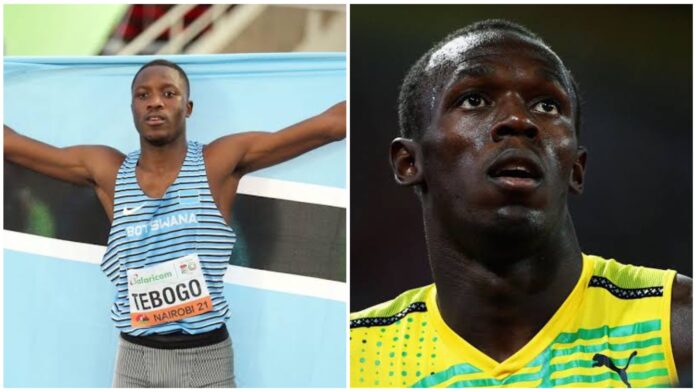 Botswana sprinter Letsile Tebogo has just defended his U-20 World Championship title in Cali. He set a new world record of 9.91 seconds, three hundredths below his record at the last World Championships in Eugene (9.94), where he reached the semifinals.

The 19-year-old, Letsile Tebogo, drew comparisons to a young Usain Bolt not only for breaking a junior sprint world record, but also for how he did it—starting his celebration about 20 meters from the finish line.

Tebogo slashed his Under-20 world record in the 100 m from 9.94 seconds to 9.91 seconds on Tuesday night at the World Under-20 Athletics Championships in Cali, Colombia.
He ran into the lead, and when victory was secured, he turned right and started waving his index finger.

In 2008, Bolt won the 100 m Olympic final in 9.69 seconds (a world record he would break the following year). His celebration began at a similar point to Tebogo’s, when he arched his arms and then slapped his chest as he crossed the finish line in Beijing.

In both cases, one of the immediate reactions was to wonder how much faster the sprinter could have gone if he had crossed the line. Tebogo said 9.8, according to World Athletics.

“If anyone found that disrespectful, I’m sorry. I saw the fans, and it was like everyone watching at home could enjoy the race—to remind them a bit of what Usain Bolt was doing back then,” Tebogo said Tuesday. fair, according to World Athletics. “He’s my idol—the person I look up to.”

There is yet another junior record for Tebogo before he turned 20 on June 7. Trayvon Bromell remains the fastest teenager in history, running 9.84 a month before turning 20.

An athlete cannot break under-20 world records in the year he turns 20. Tebogo has signed on to race for the University of Oregon starting next year.