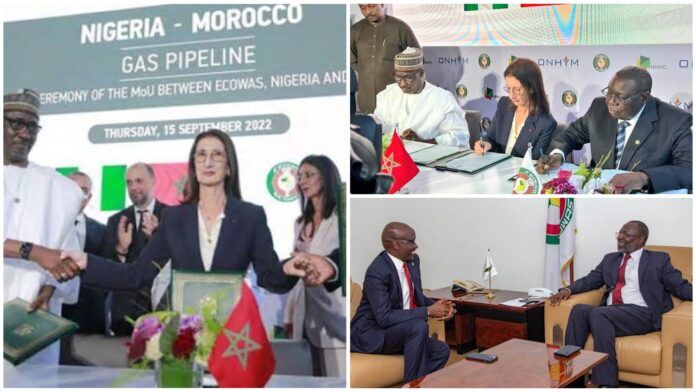 The contract, which also included the Commission of the Economic Community of West African States (ECOWAS), SMH of Tanzania, as well as Petrosen of Senegal, was intended to advance the execution of the 7,000 kilometer gas pipeline project between Nigeria and Morocco, with delivery to Europe.

Speaking at the time in Morocco, the CEO of the NNPCL Group, Mallam Mele Kyari, said that the pipeline project will create prosperity and improve living standards for countries on the African continent.

Kyari said the pipeline project would also help curb desertification and described the event as a very important milestone in the project as it reaffirms stakeholder commitment to delivery.

The head of NNPCL stated that the company is well positioned to move forward on the project, leveraging its experience and technical capabilities ranging from gas production, processing, transmission and marketing to the execution of large-scale gas infrastructure projects in Nigeria.

From the beginning of the project to the current phase, Kyari said that there was a joint effort by the government of Nigeria and the Kingdom of Morocco, which resulted in the achievements recorded.

He thanked King Mohammed VI. of Morocco and President Muhammadu Buhari for entrusting the NNPCL with what he described as a strategic project.

Kyari stated, “As you know, our countries will benefit immensely from the implementation of the project, which goes beyond supplying gas to energy countries along the route.

It is also expected to provide a reliable supply of gas and provide opportunities for other countries along the pipeline route to develop and export their gas.

The pipeline is a 48-inch x 5,300 km (offshore from Brass Island-Nigeria to Dakhla-Morocco) and 56 x 1,700 km (onshore from Dakhla-Morocco to Maghreb European (MEP)) pipeline with a total length of over 7,000 km and approximately 13 compression stations.