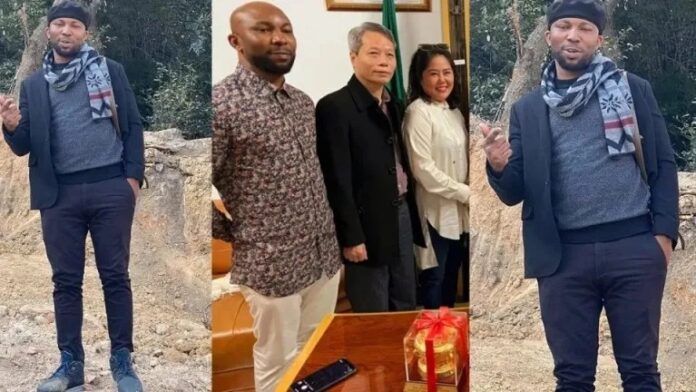 The death of a Nigerian businessman, Jude Chigbo Ihezie, has been making the rounds on social media. In what is now being tagged as a gruesome murder, the Vietnamese-based businessman was killed by unknown assailants in his home.

The 39-year-old father of two was first tortured, as marks on his body suggest; then stabbed in the chest at his residence in Hanoi on May 4, 2022.

In response to his gruesome murder; the Embassy of the Federal Republic of Nigeria in Vietnam released a statement where it stated that; the “family man” was on his way to the hospital when he passed away.

Associates and friends claim that the Nigerian was a famous businessman in Vietnam, for over ten years. Sources claim that he was particularly into buying locally made Vietnamese products and transporting them to Africa.

A well-established man as facts point out, Jude Ihezie married a Vietnamese woman, with whom he had two beautiful kids.

The statement put out by the embassy reads; “It is with great sadness that the Ambassador of the Federal Republic of Nigeria to Vietnam; His Excellency, Mr. Adamu Hassan Mamani, informs you of the gruesome murder of a Nigerian; Mr. Jude Chigbo Ihezie, of Obowo Village, in Imo State, in the morning of Wednesday, May 4th, 2022, at an apartment in Ve Linh Village, Phn Linh Commune, Soc Son, Hanoi.”

The Ambassador took the opportunity to express his condolences to all Nigerians in Vietnam over the tragic incident. He guaranteed that all necessary pressure would be used on the host authorities to ensure that the criminals meet the law and are brought to justice.

“While we await appropriate investigation and due diligence in this matter,” the minister said, urging all Nigerians in Vietnam to remain calm and not participate in any conduct that jeopardizes our rightful endeavor to obtain justice for the murdered Nigerian,” Mamani added.