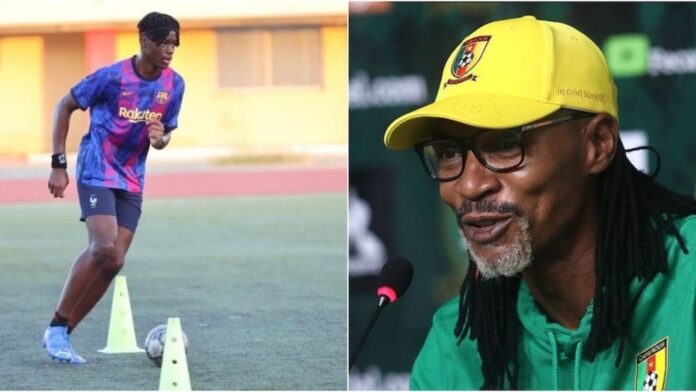 The son of former Arsenal midfielder Alexander Song says he wishes to play for the France national team in the forthcoming 2022 World Cup, because he enjoys the French team.

Nolan Song disclosed that he will turn down an approach by the Cameroon Football Federation to have him named in any Cameroon national team.

When asked by a fan if he will represent the central African country, Song said: “Cameroon is not my country, it’s my father’s country, I was born in France, raised in England, I feel no connection with ‘my country’.

Just because my dad played for the country doesn’t mean I have to do it. “I don’t feel Cameroonian, the only connection I have with the country is my family. This is why you’ll never see me in Cameroonian gear. Probably gonna play for France.

Nolan Song, a young football star was born in Cameroon but moved to France at a very young age, where he began a career in football. This means the 16-year-old is eligible to play for Cameroon and France. Nolan Song, son of Alex Song has said he will play for France instead of Cameroon.

The youngster is the son of ex-Arsenal defensive midfielder Alex Song and nephew of current Cameroon head coach Rigobert Song, who prominently featured for the Indomitable Lions in the 1990s and 2000s.

Nolan’s father, Alex Song, made his debut for Cameroon in 2005. He featured in four AFCON’s and two World Cups for the Indomitable Lions before retiring in 2015 at the age of 27.