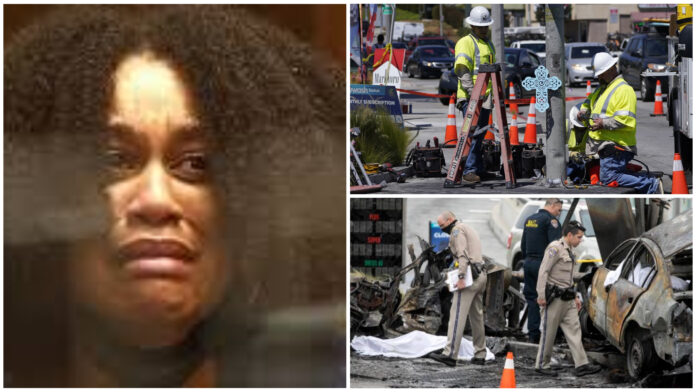 The traveling nurse, accused of killing six people, including an unborn baby, has a history of mental health problems, according to prosecutors and her lawyer.

The California Highway Patrol said it had records of at least 13 previous accidents — including a 2020 crash involving two cars in total — and knew of the threat posed by her driving.

The driver, who caused an accident near Los Angeles that killed six people—including a pregnant woman, her child and her unborn baby—was charged with six counts of murder.

The nurse, Nicole Lorraine Linton, an itinerant nurse in Houston, was also charged on Monday with involuntary vehicle manslaughter and was being held without bail.

The 37-year-old who did not file an appeal in her first court appearance on Monday, arrived in a wheelchair, to the court proceeding. Prosecutors said her Mercedes-Benz was traveling at 90 mph (ca. 145 km/h) last Thursday when it collided with cars at a Windsor Hills intersection, igniting several vehicles.

A 23-year-old woman, who was 8 and half months pregnant, her unborn child, her 11-month-old son who was about to celebrate his first birthday and her boyfriend, all died in the car accident.

If convicted on all counts, Linton faces up to 90 years in prison.

In court, Linton’s attorney, Halim Dhanidina, said his client had a history of “profound out-of-state mental health issues” that may be related to the accident but were not specified, the Los Angeles Times reported.

Interestingly, authorities said they found no evidence that Linton was under the influence of alcohol or drugs.

Sources claim that because the defendant’s traffic history spans multiple jurisdictions, officials cannot confirm the exact number of collisions. “All we can say is that she has been involved in several previous collisions, including one in 2020 that involved two wrecked cars and physical injuries,” the source said.

Linton was also believed to pose a flight risk as she works as an itinerant nurse and this informed the judge’s decision to deny her bail application. According to records, Linton moved from the Washington, D.C. area in 2013 to Laredo before moving to Houston in 2014.