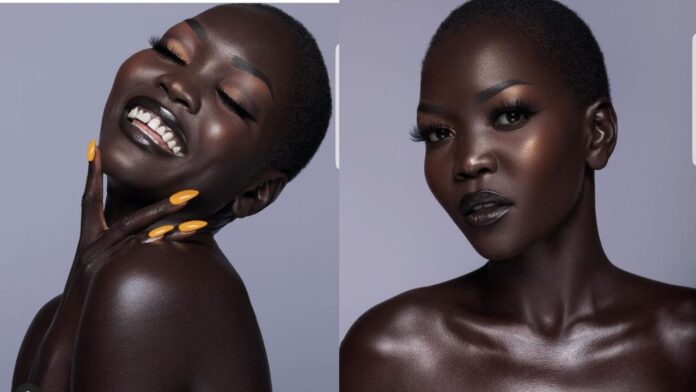 Nyakim Gatwech is a beautiful Black Model of South Sudanese descent. She left her country and moved to America to chase greener pastures and has been successful at it. Just like any other black person, Nyakim faces criticism and abuse for the melanin she carries so proudly.

Born in Ethiopia on January 27, 1993; This Queen of the dark has stormed the model industry and attracted attention for her dark skin color; channeling it to achieve significant Popularity in the world.

She admits that since coming to America to pursue her modeling career; her journey hasn’t always been easy. She talks about how the modeling industry is tough, and how she had to handle rejection because of her height or weight. She also shares that her darker skin tone has also presented opportunities and challenges.

Her Response to Body-Shaming

With fame comes obstacles. Almost everyone has an opinion on how you should look, dress and live your life. Nyakim doesn’t escape this, as she has received numerous insults about her skin color. In her response, she says she loves her skin color and will not put up with anyone trying to shame her for it. When she was once asked by an Uber driver; if she’d consider bleaching her skin for $10,000 she couldn’t help but laugh.

Nyakim Speaks Out over Offensive Tweet from a University Professor

Nyakim found herself in a different kind of position after a Columbia University professor made an offensive tweet about her.

Dr. Jeffrey Lieberman, Columbia University Professor wrote, “Whether a work of art or freak of nature she’s a beautiful sight to behold.”

Nyakim replied saying “I feel like he’s unintentionally being racist, naturally, if you want to give someone a compliment, why would you use the words freak of nature.”

Nyakim’s large online followers went ahead to call out the professor, Dr. Jeffrey Lieberman for his racially insensitive tweet.

“With me, I’ve heard so many negative comments towards my skin color before, when I saw that I was like oh, here’s another one,” she said of the controversy sparked by Lieberman’s tweet.

Lieberman also resigned as executive director of the New York State Psychiatric Institute, according to the New York Times.

Gatwech says Lieberman did not personally apologize to her. He did address the controversy with colleagues in an email obtained by the New York Post which reads in part; “I tweeted from my personal account a message that was racist and sexist. Prejudices and stereotypical assumptions I didn’t know I held have been exposed to myself and to you and I’m deeply ashamed and very sorry.”

Gatwech says at one time, her darker skin caused her to experience bullying and depression.

“Colorism is something I have experienced well more than racism. Racism, people will be racist under their breath, people will try to be slick about it, but colorism in the Black community, it’s right in your face. I experienced bullying in the hands of Black kids the most,” Gatwech said.

Charmain Jackman, Ph.D., is a licensed psychologist and the founder of InnoPsyche. She says negative comments about a person’s skin tone can have long-lasting effects on their mental health.

“The skin you have is the skin you grow up and live with, you can’t change that.  Having trusted adults that young people can talk to and engage in that, and having people who can affirm your identity and counter those images is really important,” Jackman said.

Gatwech is not dwelling on Lieberman or his tweets despite the uproar it caused; she is focusing on her modeling career and using the experience to continue being a positive role model for other people with darker skin so they too can appreciate their true beauty inside and out.

“I came to this country at 15 years old, and felt like I was not accepted and felt like I do not belong; so for me to work so hard and be comfortable with myself first and learn to love me; and accept my skin color and then now I’m going out to the world and God opened this door for me and give me this platform; I didn’t ask for, I didn’t ask to go viral,” Gatwech said.

Share
Facebook
Twitter
Pinterest
WhatsApp
Previous article
Breaking: Ugandan Man kills a Lion with his Bare Hands
Next article
Elizabeth Nalem, the Kenyan Woman Who Left Her Husband Of 20yrs To Marry The “Holy Spirit” has been Found Dead