After gaining acclaim and scooped awards for playing Assane Diop, an ingenious French thief. Omar Sy is now diving into an uncomfortable French story from his father’s country, Senegal. He will play the lead in Father & Soldier, an action drama that revisits the role of African soldiers in World War I, Variety reports. Sy will play Bakary, a Senegalese man whose 17 year-old son Thierno is forced to fight for France in the war. Bakary enlists in the trenches to protect his son.

According to Variety, the movie is already shooting in France, with Senegal next on the itinerary. With a $14 million budget, Omar Sy and his collaborators could generate more popular attention to mistreated; forgotten African heroes of European wars.

Omar Sy will portray soldiers known as Senegalese tirailleurs, men from French colonies in Africa who were recruited – in some cases drafted by threat of land occupation – to fight in wars for France.

From Senegal, France expanded the pool of eligible infantrymen to include Algeria, Tunisia and Morocco. France had 200,000 of these troops for World War I alone, of which 30,000 were killed. Abdoulaye N’Diaye, the last surviving Senegalese soldier to fight in that war, died in 1998. 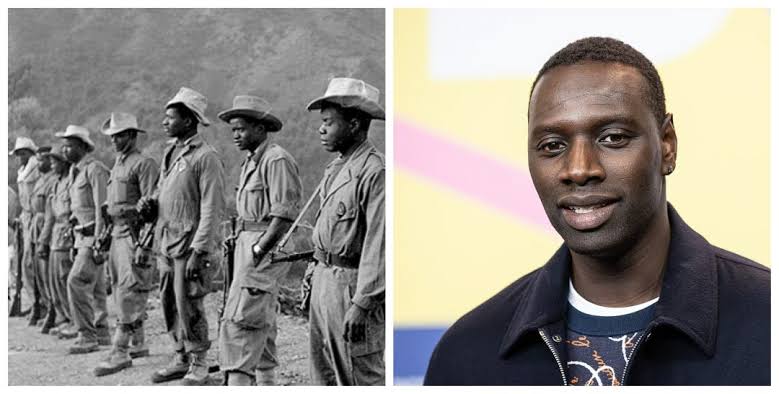 But the really gritty story of West African soldiers fighting for France came in December 1944, months after the liberation of Paris towards the end of World War II, when the French army killed hundreds of colonial troops in a demobilization camp outside Dakar, Senegal. Your crime? They demanded their deserved fair wages, which were in any case less than that of their white French colleagues.

The Thiaroye Massacre, as this tragedy has been known since then, was largely kept in silence by the French government; but creative works have helped remind people that it happened.

Thiaroye camp, a film by the Senegalese author and filmmaker Ousmane Sembène (and soldier in the French army from 1944 to 1946), is probably the best-known work on this subject. As if to prove its effectiveness, Sembène’s film was apparently banned in France for a decade.

Previous articleHow a Nigerian Doctor Prof. Omotara rejected a job in the US to train 3000 Doctors in Nigeria
Next articleBanyankole Tribe of Uganda Where the Bride’s Aunt Gets to sleep with the Groom before the wedding

Want to stay up to date with the latest African trends?

Dominica's government is committed to transforming the country's housing and urban development sectors. As a result, housing programs...
Africa

The case of Peter Nielsen, a Danish man, was deliberated upon and judgment was passed at the Lagos...
Africa

The Caribbean has been experiencing several earthquakes within the last few days. According to reports, the latest earthquake recently...
Africa

Krio, a Sierra Leonean language, has joined several languages from different parts of the world to make its...

I love Africa is a Global African and diaspora platform that was born by the inspiration of our love for Africa, to promote Black people globally, African Culture, Enlighten and Entertain. To be a guide to those seeking to learn about Africa and the African Diaspora nations.

Dominica's government is committed to transforming the country's housing...

The case of Peter Nielsen, a Danish man, was...

The Caribbean has been experiencing several earthquakes within the...

Okey Bakassi, a Nigerian actor and comedian, has expressed...