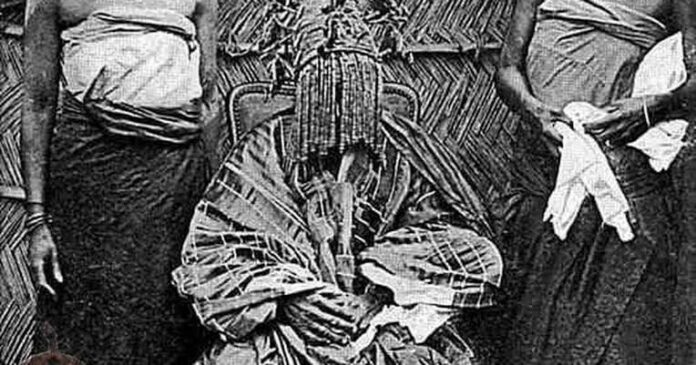 Alaafin Ajiun Orompotoniyun also known as Orompoto governed the Oyo empire in the 16th century, circa 1554 to 1562.

Between these years, Orompoto was in charge of the Oyo Empire and she was the first woman to be appointed as Alaafin of Oyo during the imperial era.

Orompoto ascended to the kingdom because her family had no male heir at the time.

It is no news that male traditional monarchs are common in Nigeria and throughout Africa.

These traditional monarchs are well-known figures in their respective communities.

In Nigeria, though, female rulers are nearly unheard of but the story of Orompoto is different.

Female rulers are usually spouses who are put in charge of ‘domestic matters’ as leaders of women’s organizations.

This somewhat refers to the patriarchal structure of the country’s affairs years ago and regulations prohibiting women from holding such positions in their local communities.

From the poorest to the royal family, having a male child who will carry on the family name (Arólé) or rule the communal affairs in his father’s absence has always been a problematic subject.

An Arólé is a male child who is entrusted with the burden of carrying on the family legacy.

In the same line, Arólé is known as the Arèmo in the Yoruba royal dynasty. The Arèmo is anticipated to be the Kingdom’s next Alaafin.

However, the Yoruba people’s practices forbid a female Arólé who they purportedly believe is meant to be protected by a male gender later in life when she grows up.

But again, thanks to civilization because these things are changing.

When discussing female traditional leadership in Nigeria, one of the most common outliers is Orompoto.

The Oyo Empire is one of West Africa’s most powerful empires, owing to the Yoruba people’s exceptional organizational and administrative abilities.

This can tell you how much of a ruler she was.

The Oyo Empire prospered in what is now southwest Nigeria from the 17th to the 19th century CE.

The Oyo Empire was a Yoruba empire that ruled over Benin and northern Nigeria.

The Oyo Empire, founded in the 12th century, grew to become the biggest Yoruba empire. It rose as a result of the Yoruba people’s exceptional organizational and administrative skills, trading prosperity, and powerful army.

By the end of the 14th century, Oyo had developed into a formidable inland power. For more than a century, the Yoruba state grew at the expense of its neighbors.

During the reign of Onigbogi (a king), Oyo suffered military defeats at the hands of the Nupe.

The Nupe – a town (traditionally called the Nupawa by the Hausas and Tapa by the neighbouring Yoruba)” are an ethnic group native to the Middle Belt of Nigeria) led by Tsoede .

The Nupe trace their origin to Tsoede who fled the court of Idah and established a loose confederation of towns along the Niger in the 15th century.

Around 1535, the Nupe captured Oyo, forcing its ruling family to flee to the kingdom of Borgu (Borgu is a region in north-west Nigeria and in the northern Republic of Benin).

The Nupe destroyed Oyo as a provincial power until the early 17th century when they sacked the city.

From the mid-15th to the late 18th centuries, the Oyo Empire ruled not only over most of the other kingdoms in Yorubaland, but also over neighboring African states, most notably the Fon Kingdom of Dahomey in the modern Republic of Benin to the west.

Due to their superior cavalry corps, the Oyo formed an empire and came to dominate other Yoruba peoples in the region.

The Oyo Empire profited from regional trade and became a key facilitator in bringing slaves from Africa’s interior to the coast and waiting for European sailing ships, with its capital at Old Oyo near the Niger River.

The human trade was so extensive that this region of Africa became known simply as the “Slave Coast.”

The Oyo eventually lost to the rising Islamic powers to the north, and the empire had collapsed into several rival chiefdoms by the mid-19th century CE.

According to traditional stories, the founder of Oyo state was one Oranmiyan (aka Oranyan), son of Ife’s founder, Oduduwa.

As a result, the kingdom grew to include areas in the southwest and territory in the savannah to the north from its neighbors, the Borgu and Nupe states.

Around 1535 CE, the Nupe conquered Old Oyo and held it until the Oyo kings reclaimed it around 1610 CE.

Orompoto ascended to the kingdom because her family lacked an adult male heir at the time.

The Oyo Empire was a Yoruba empire that ruled over what is now Benin and northern Nigeria.

The Oyo Empire, founded in the 12th century, grew to become the biggest Yoruba empire.

It rose as a result of the Yoruba people’s exceptional organizational and administrative skills, trading prosperity, and powerful cavalry.

From the mid-15th to the late 18th centuries, the Oyo Empire ruled not only over most of the other kingdoms in Yorubaland but also over neighbouring African states, most notably the Fon Kingdom of Dahomey in the modern Republic of Benin to the west.

Alaafin Ajiun Orompotoniyun governed the Oyo empire in the 16th century, from 1554 to 1562, speculatively.

When her father died, her brother, Prince Eguguoju, took his place.

During his reign, the capital city was relocated from Oyo ile to Oyo Igboho (New Oyo), following a protracted conflict with the Nupes and internal fighting.

However, he died at an early age, leaving no male heir.

His younger brothers, Prince Ajiboyede and Prince Tella were too young to take the kingdom at the time.

Princess Orompotoniyun was the only link to the Alaafin dynasty, but because a woman could not rule the empire, the chiefs and elders plotted how to establish themselves as monarchs.

When Princess Orompoto learned of their plot, she summoned the chiefs to discuss plans for her coronation, but the chiefs and elders rejected them, claiming that a girl could never become king.

Orompotoniyun, still adamant, told them she was ready to prove to them that she was a man, not a woman.

Prior to it, she was a female regent who helped remove the Nupe from Oyo after a long fight in 1555.

According to legend, she chopped off her breasts and disguised herself as a man in order for the Oyo Mesi to recognize her as Alaafin.

On the other hand, the chiefs and elders had begun to plan who would be installed as the next monarch of the Oyo Empire.

Orompoto became stronger with each plot they devised, insisting that she was the only link to the dynasty and thus had to sit on the throne.

Princess Orompoto summoned the chiefs to discuss plans for her coronation in an attempt to defend her family’s rights but received the same careless answer.

She then requested that she demonstrate to the elders and chiefs that she was a man, as this was the only obstacle to her coronation.

The chiefs decided it would be a nice way to mock her, so they urged her to prove her masculinity by stripping naked in front of the palace.

After this meeting, Princess Orompoto began wearing male attire, and on D-day, she mounted the stage and removed her cap, revealing her short hair.

She went on to reveal her chest, but the elders were not impressed.

She eventually removed her trousers, and the chiefs not only saw a penis but also a drooping scrotum sack with two scrotum eggs, according to oral history.

Everyone fell to their knees in prostration, and she was enthroned as Alaafin Orompotoniyun.

Because of her clever and skilled reign as queen and commander, she was generally regarded as “the caretaker of the vagina that eliminates bad schemes.”

She was also recognized for her use of horses in military battles due to her prowess as a rider.

In 1557, she traveled as far as Timbuktu to import horses for her renowned cavalry, and she employed 1000 horseback archers to shoot adversaries with poisoned arrows.

Alaafin Ajiun was killed in the battle of Ilayi in 1562 while fighting for her people. She is the only one of the 40 Alaafin (39 males) who died in combat.

Orompoto was a bold leader and a skilled warrior who accomplished many things during her reign, including pushing the Nupe out of the Oyo Empire in 1555.

Although she was killed in the battle of Ilayi, history claims she fought bravery and she was succeeded by Ajiboyede, another victorious Alaafin of the Oyo empire.