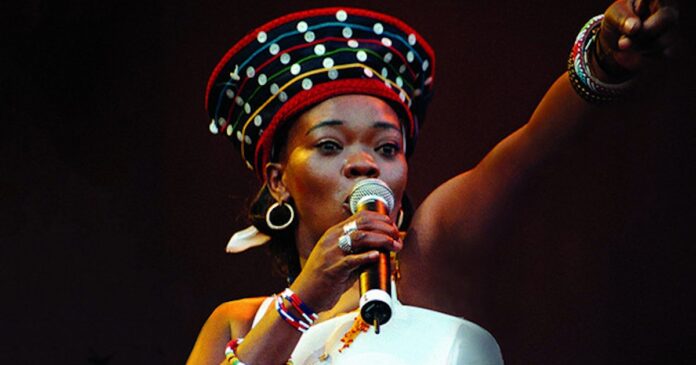 Brenda Fassie was Africa’s indisputable Queen of Pop, a dazzling diva whose continent-wide appeal was rivaled only by her troubled personal life’s scandals and addictions.

Africans enjoyed her piercing voice and pounding, patriotic pop tunes from sweaty pubs in Sierra Leone to nightclubs on the Indian Ocean coast. “Out of 1,000 individuals in Africa, maybe two will say they don’t know Brenda,” her agent, Sello “Chicco” Twala, allegedly boasted.

Brenda Fassie, a South African singer, songwriter, dancer, and activist, was born as the youngest of nine children on November 3, 1964, in Langa, Cape Town.

Her mother, Makokosie Fassie, was a domestic worker who was a brilliant pianist, and her father, who died when she was two, was a great singer.

Her brother, Themba Fassie, recalls their father coming home from work and rushing at the piano, summoning other members of the family to join him or sing from wherever they were in perfect harmony. Fassie’s upbringing was centered on music and performance.

After her father’s death, she began earning money by singing for visitors with the help of her mother.

Koloi Lebona, a prominent music producer and performer, paid Brenda Fassie a visit when she was 16 years old in 1981.

As a result, she relocated from Cape Town to Soweto, Johannesburg, to pursue a career as a singer.

Brenda Fassie began her career with the vocal group Joy and then became the lead singer for the township music group Brenda and the Big Dudes. Her first recording was the hit track “Weekend Special” in 1983.

She was dubbed “the Queen of African Pop” by her fans.

In 1983, Brenda Fassie joined the band Brenda & The Big Dudes, which was responsible for the smash single “Weekend Special,” which became an anthem for the punk and pop black South African township communities.

With the subsequent release of more successful songs like “Life Is Going On,” they became the sound of the 1980s and one of the most popular bands at the time.

This band went on to dominate with dance singles like “Oh what a night,” influential hits like “Can’t stop this feeling” and “Let’s stick together” – these releases put Fassie at the forefront of South Africa’s budding pop era.

Brenda Fassie had her only child, Bongani Fassie, in 1985 with then-lover and band member Dumisani Ngubeni.

Fassie’s love life became the focus of public attention and scrutiny as she rose in popularity and money.

She played into the clutches of the media to some level, despite her critics for its presence in her life and frequent fabrication.

Her desire for attention, adoration, and constant praise resulted in a complicated relationship with public life.

She devoured any opportunity for attention, even calling the press on her way back from Paris to announce that she would be divorcing her then-husband Nhlanhla Mbambo because he refused to send her money.

To some sense, Fassie invited the media’s destruction and turmoil. Its relentless presence remained throughout the 1990s, a decade that marked the beginning of her collapse and fight with drugs and alcohol addiction.

She was extremely famous due to her outspoken views and numerous visits to Johannesburg’s poorer slums, as well as songs about life in the townships.

In 1990, the outspoken artist released the song “Black President,” a tribute to Nelson Mandela, who was still imprisoned. She subsequently announced that she would no longer sing in English, saying,

“I am pleased to be an African.” Hence, subsequent songs will be written in Zulu, Xhosa, and Sotho“.

She was also dubbed “The Madonna of the Townships” by Time Magazine in 2001 for her songs “Weekend Special” and “Too Late for Mama.”

In 1995, she was discovered unconscious with the body of her lesbian partner, Poppie Sihlahla, who had died of an apparent overdose, in a drug-related event.

Brenda returned in 1998 with the release of Mameza (Shout). It went platinum on its first day of release and became South Africa’s best-selling release of the year. Brenda’s personal difficulties, however, were not over.

Fassie survived, completed therapy, and relaunched her career. She did, however, continue to have drug problems and had been in drug rehabilitation facilities approximately 30 times throughout her life.

Brenda Fassie’s iconic reputation evolved alongside a cultural revolution in South Africa, which introduced some of the country’s most innovative music with Brenda Fassie at the head.

She led a band of musicians who pushed revolutionary lyrics about the reality of being Black in South Africa into the pop world.

She did so in humorous, indirect, coded methods of expressing that are often open secrets on the streets.

Her renowned music collaboration with lyrical master, arranger, composer and former Harari percussionist Chicco Twala established her as the most influential and fitting voice to portray the plight of Black people.

Fassie’s smart work ethic and talent were essential factors in winning the hearts of Black South Africans, but her passion for Black people, their liberation and humanity, her living among them, and her tenderness confirmed her as a valued and committed member of the Black community.

Fassie was a woman ahead of her time, living by her own rules. She struggled to remain a popstar in the face of a media storm that seemed more interested in her controversial off-stage life than her songs.

The death of Brenda Fassie

Brenda Fassie slumped at her Buccleuch residence on April 26, 2004, and was rushed to Johannesburg’s Sunninghill hospital.

The press claimed she had experienced cardiac arrest, but it was later revealed that she had gone into a coma due to an asthma attack.

The post-mortem study found that she had overdosed on cocaine the night before her collapse, which caused her coma.

She ceased breathing and suffered brain damage as a result of a lack of oxygen. Brenda died on May 9, 2004, at the age of 39, at a hospital after her life support devices were turned off.

However, it is claimed that the crack cocaine she smoked the night before her cardiac collapse was mixed with rat poison.

According to the South African Sunday Times and her music company’s managers, the post-mortem report revealed that she was HIV-positive. Peter Snyman, her manager, denied this part of the story.

Her passing drew condolences from all over the continent, but South African President Thabo Mbeki delivered the most moving eulogy. “She was a Pan-African griot, helping souls rise in joy wherever her voice touched,” he remarked.

She was ranked 17th among the Top 100 Great South Africans.

Brenda had a difficult time in the early 1990s, according to the website Nation Audio.

Few of her songs

Throughout her brilliant career, she gave up all of her money, occasionally going bankrupt. She struggled with a cocaine addiction for years, but her bold decision to seek assistance prompted other celebrities to do the same, opening the door for people to discuss addiction.

Her connections with women brought to light the hardships of queer Black women.

Brenda Fassie never let anyone mute her voice, no matter how hazardous it was for Black South Africans to speak out against apartheid. And she provided hope to tiny Black girls everywhere. She was indeed a trailblazer.