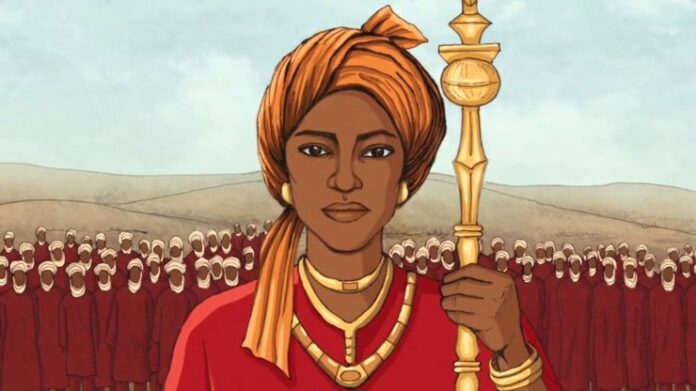 History shows that Queen Amina might have been born in 1533 and was the oldest child of Bakwa Turunku, a senior member of the Kufena king’s administration.

She was born in the modern-day Nigerian region of Zazzau, one of the seven Hausa city-states that dominated trade in the sub-Saharan region when the Songhai Empire fell at the end of the 16th century.

The term “Zazzau” alludes to the Zaria Emirate, a traditional state with its capital in Zaria, Kaduna State, Nigeria.

Queen Amina of Zaria was so powerful that she was also referred to as the “warrior queen,” and she was the first woman to hold the title of Sarauniya (queen) in a culture where men predominated.

She increased the Hausa people’s land in north Africa and its prosperity was a result of the trade in Eastern imports of metals, horses, salt, kola, cloth, and leather.

Queen Bakwa of Turunku, Amina’s mother, began teaching her the duties of a queen when she was only 16 years old.

At that age, Queen Amina also started participating in daily gatherings with the king’s highest dignitaries.

Amina decided to learn military skills from the warriors even though her mother had ruled during a time of peace and prosperity.

When Queen Bakwa died, Amina’s youngest brother Karama took over as ruler of the Zazzau kingdom.

Karama, in contrast to Bakwa, enjoyed battle and was eager to grow the Zazzau kingdom. After only two years as king, he had already planned four significant military operations which Queen Amina competed in all four.

Research speculates that she really enjoyed fighting and had numerous admirers, however, she had no interest in getting married.

She became the top warrior of Zazzau very fast, thanks to her bravery and fighting prowess.

Amina rose to prominence as the lead fighter of the kingdom during her brother’s rule. She acquired wealth and power as a result of her military victories.

Amina became queen of Zazzau in 1576 after her brother, who had ruled the country for almost eleven years, passed away.

She created multiple cities, extended her kingdom’s borders all the way to the Atlantic coast during her 34-year reign, and personally commanded an army of over 20,000 warriors in numerous conflicts.

She significantly increased Zazzau’s size and riches during her 34-year rule, built strong walls around its cities, and established military barracks.

Although history has lost the exact story of Queen Amina’s demise, it is believed that she might have died in war at Attaagar (near present-day Bida, Nigeria).

Amina is remembered not only for her pioneering efforts as a great woman warrior but also for her military innovations, including building fortified walls around Zazzau cities.